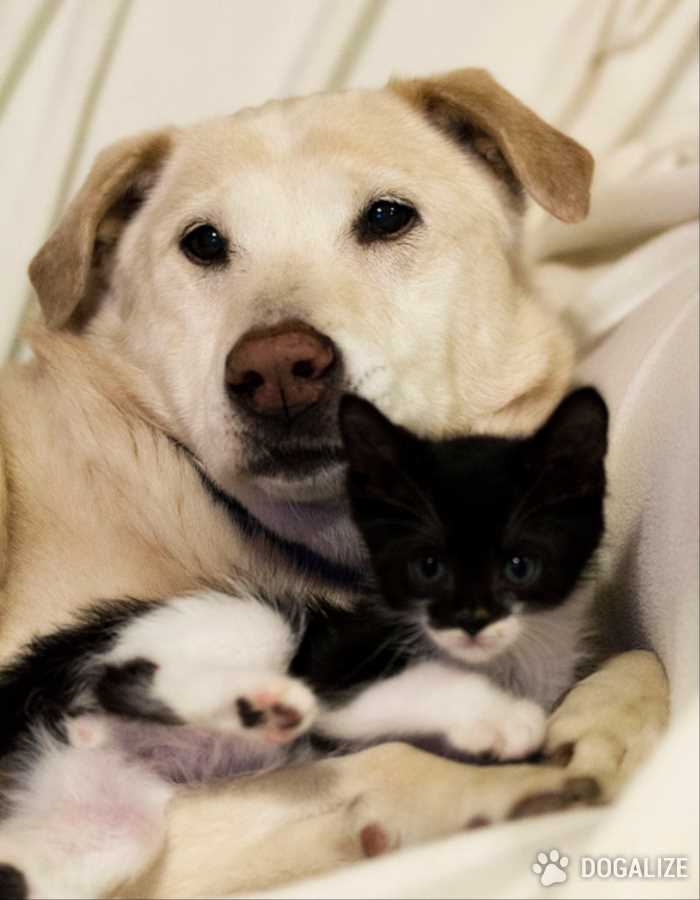 Two large female guard dogs living with a family in the tiny Grant County town of Mt. Vernon have “adopted” an orphaned kitten.

Dog owner Tiffany Hull said about six weeks ago one of the guard dogs, a kelpie mix named Chaos, brought a kitten in her mouth from the family’s backyard. Though Chaos is a hunter — she has killed chipmunks and birds — the kitten was unharmed.

Hull’s boyfriend put the orphaned kitten back on the other side of the fence, where he thought the kitten’s mother might live. But later that night, the dog brought another kitten — and friends of the family took it home.

Next day, the couple found the original kitten meowing under a pile of leaves. The kitten’s mom was still missing, so they took it inside and wrapped it in fleece blankets.

The kitten was likely about a week old — his eyes were still closed, Hull said. They named him Jake. Hull bottle-fed him until last week and now he’s thriving, she said.

At first, Hull said, Chaos was overprotective of the kitten: she kept guard by the shoebox where Jake slept and growled at the other dog, a half-lab, half-pit bull mix named Atilla.

But a week after the rescue, Chaos let Atilla get close to Jake.

Since then, both guard dogs have mothered the kitten. They lick him clean, let him play on top of them, and snuggle with him.

Chaos has had several pup litters in the past, Hull said, but Atilla can’t get pregnant because she was run over as a young dog.

“I think their motherly instincts kicked in,” Hull said, adding that she’s thrilled. She found out this month she’s pregnant herself, so she’s hoping the guard dogs will love and protect her baby too.

If you’re curious about any news concerning dogs and other animals’ lifestyles, visit Dogalize!