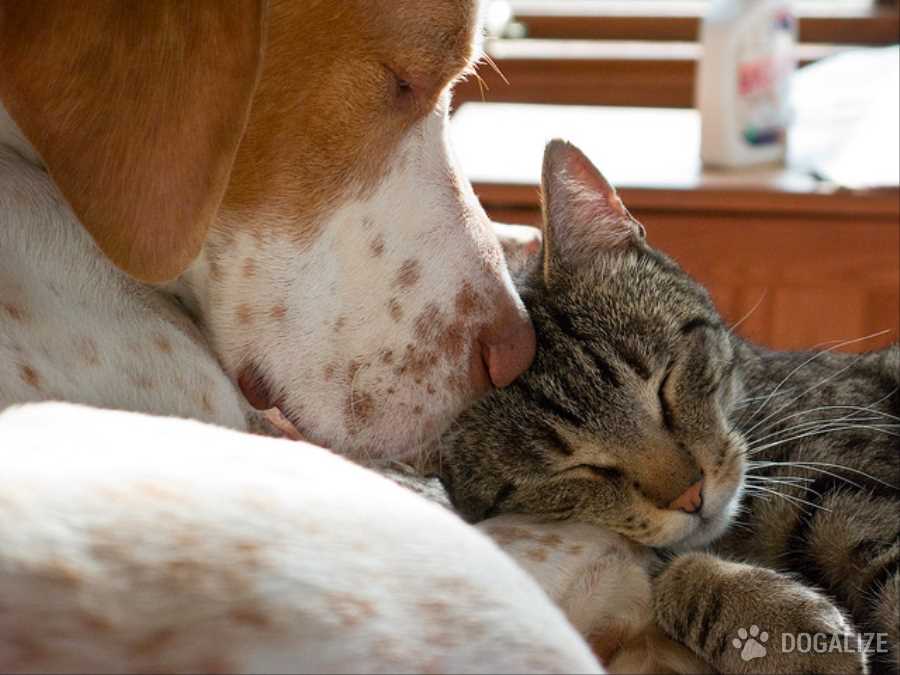 Why Dogs and Cats sleep that much?

Why Dogs and Cats sleep that much? I envy my dogs for their ability to sleep, Jezebelle and Baguette spend most of their hours dozing. They ramp down from active to asleep in mere minutes. Veterinarian Judy Morgan puts this sleep envy in perspective.

“Dogs sleep more hours than people because they generally don’t sleep as deeply,” she said.

“They are a little more on ‘alert’ when sleeping because they have to guard the pack, the den, the food. This has changed since they have been domesticated, but they still sleep more than we do.”

Perhaps Jezebelle is guarding me at night when she positions herself on the landing at the top of the stairs. I don’t imagine Baguette dreams of guarding anything, as she sometimes snores in a deep slumber.

Cats also snooze more than we do.

“Cats generally sleep a lot, even in the wild — 16 to 20 hours a day,” Morgan said. “They expend a lot of energy in short bursts stalking and hunting prey, eat a high protein meal, then sleep.”

Just like people, though, our pets can suffer from a bad night’s sleep.

“Old dogs who develop Cognitive Dysfunction Syndrome [basically senility] may pace or bark at night instead of sleeping. They may sleep all day but not at night. Lack of stimulation and interaction can contribute to the pet being more withdrawn and sleeping more. Old dogs or cats with decreased hearing and vision may also seem to sleep more and be more withdrawn,” she said.

Morgan, a holistic vet, recommends high doses of omega 3 fatty acids for CDS, as well as extra B vitamins in the diet or as a supplement. Sardines are a great supplement for Omega-3 and Vitamin D. Sam-e (antioxidant) and coconut oil (medium-chain triglycerides) also are helpful.

She noted the drug Selegiline helps with CDS in dogs at least 50 percent of the time. Side effects can include deafness, which may reverse if the drug is stopped. More exercise or stimulation during the day can improve nighttime sleep.

Cats develop cognitive dysfunction less than dogs. If they suddenly start howling, pacing, or begging for food in the middle of the night, they may be suffering from a disease like hyperthyroidism, she said.

Dogs with anxiety disorders may try to keep one eye open at all times, making it difficult to obtain a deep, restful sleep.

She advises pets with changes in sleeping behavior should be seen by a veterinarian. Natural treatments for sleep disorders can include melatonin and omega 3 fatty acids.

Thankfully, my dogs sleep well and never drag through the day or night. For now, I’ll stay awake at night, jealous of their slumbers, worrying about something other than their sleep habits.

If you’re curious about any news concerning dogs and other animals’ lifestyles, discover what Dogalize has for you!