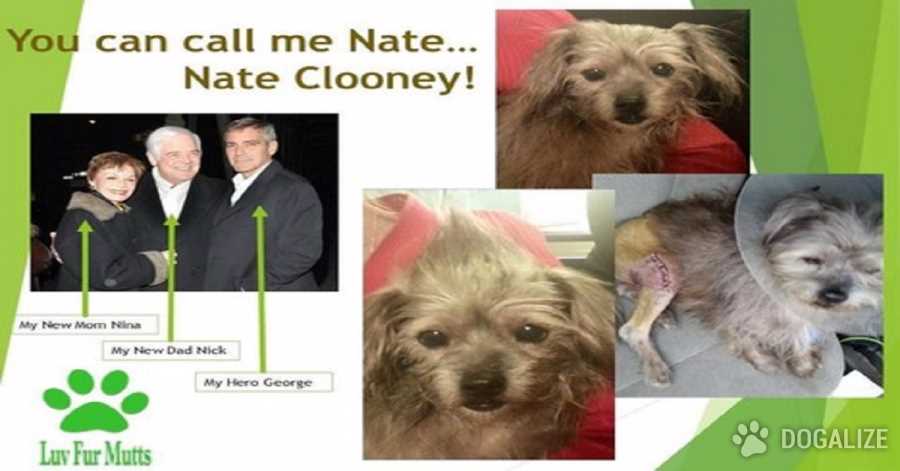 George Clooney, already known for being a dog lover and a shelter benefactor, is again being praised by the animalist community after he adopted one more rescue dog. His name is Nate, a 10-year old Terier, and he has officially become a new member of Clooney family (lucky boy!).

Nate is an underdog with problems and defects, which makes Clooney’s will to take him even more praiseworthy. On the Facebook page of LuvforMutts Animal Rescue you can read his story: “He was born with birth defects. A barrel chest, a leg that swayed. He walked like a Hyena. Some of these dogs were fat, but not our Nate. You could count the ribs on him. When we took Nate to adoption events, people would stare and kids would point. Several people applied to adopt him, but then said no when they met him”.

Nate got his revange against a cruel destiny, a sad story come to a happy ending. Now Nate is living with George Clooney’s parents, who love and care for him as a child.

“We are just over the moon and most appreciative that they love Nate just the way his is… Our Nate is loved and in his forever home and will be spoiled to death for the rest of his life. From fighting to get food in his belly each day to being the only fur baby of two of the most wonderful people in Augusta, Kentucky, it’s truly a fairy tale ending for Prince Nate… or should we say… a perfect Hollywood movie ending,” was jubilantly posted on the rescue’s site.