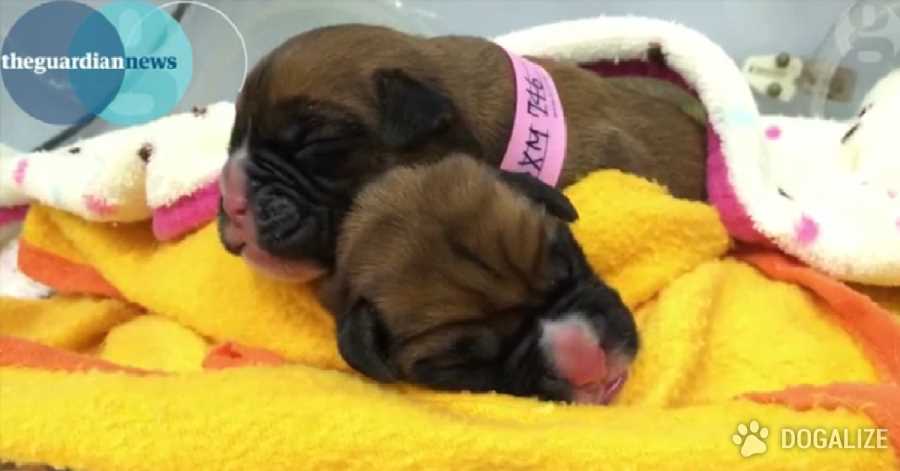 British Couple Celebrate The Birth Of Their Cloned Puppies | Dogalize

A few months ago we told you about a British couple who started the procedure to have their dead Boxer dog, Dylan, cloned.

Laura Jacques and Richard Remde, from Yorkshire, decided to employ the services of the Sooam Biotech Research Foundation, a Korean company which offers a dog cloning service for $100,000 (£67,000).

They provided tissue samples containing Dylan’s DNA and were thrilled when they received the news that two pregnancies had been established in surrogate dogs.

The two puppies have recently been born and their health conditions are good. Chance and Shadow are bonding with their mothers who are feeding and caring for them. Both puppies bear markings that are identical to those Dylan had. Chance has been given the tag 746 and Shadow the tag 747 so everyone is clear which puppy is which.

The boxer puppies have made scientific history – they were cloned from the couple’s dead dog almost two weeks after it died. The previous limit for dog cloning was five days after death.

Although a regulation on dog cloning does not exist yet, The RSPCA expressed concern. A spokesperson said: “There are serious ethical and welfare concerns relating to the application of cloning technology to animals. Cloning animals requires procedures that cause pain and distress, with extremely high failure and mortality rates. There is also a body of evidence that cloned animals frequently suffer physical ailments such as tumours, pneumonia and abnormal growth patterns.”