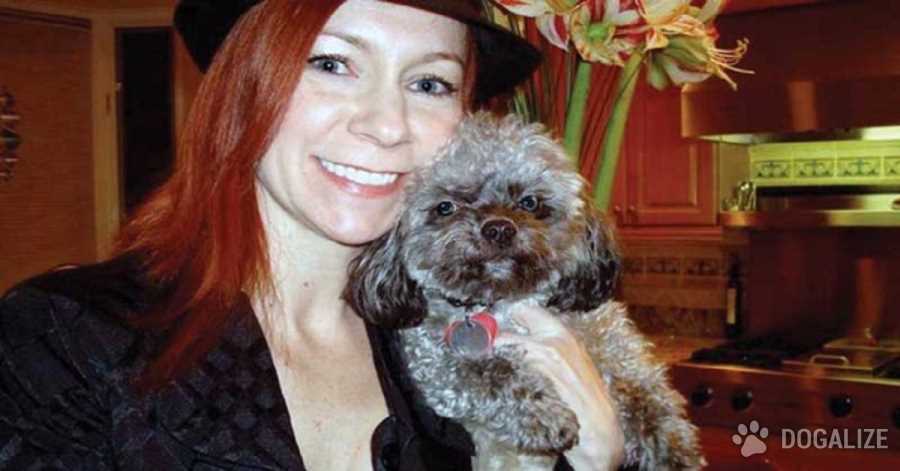 We report part of an interview with the actress Carrie Preston by Marie Jo-Dionne, previously published on Modern Dog Magazine.

MD: Have you always been an animal lover?

CP: Yes, growing up in the south we spent a lot of time romping around the back woods. We had all kinds of pets growing up. Frogs, hamsters, mice, and even rats at some points, and certainly we had cats. And we had one beloved dog that had the great fortune of living for a long time. That was when I definitely fell in love with dogs.

MD: Rumour has it that you and your husband, actor Michael Emerson—best known for his roles on Person of Interest and Lost have a pretty special fur-kid. How did Chumley come into your life?

CP: It was something we’d been dreaming about for a long time. We really wanted to get a dog. But we were unable to work it out because Michael was shooting Lost, which shot in Hawaii and is challenging when it comes to travelling with dogs. We’d been planning for it for a long time, logistically. We would talk about it and dream about it. One day we were walking in the West Village, past the old speakeasy called Chumley’s. Michael said: “You know what would be great a name for our dog? Chumley!” I would wake up on various days and randomly ask him: “So, where’s Chumley?” When we knew he was going to be finishing Lost and when we knew his actual end day… well, I would go on PetFinder.com for years and torture myself with all the dogs I wanted to adopt… and then when I knew it was finally going to happen, I knew I needed something small that didn’t shed because I’m slightly allergic. I saw all of these adorable dogs and this picture of this little guy just lifted itself off the page. I wish I had that picture. He had these little squinty eyes. Like a little old man. The description written up by A Dog’s Life Rescue just made it sound like this is the dog for me. I started calling and trying to convince them that I was the one for this dog. When I met him, it was love at first sight. Thanks to A Dog’s Life, we have the love of our life.

MD: I love that when you were ready, you adopted a dog rather than bought a dog.

CP: We really wanted to make sure we were adopting a dog that needed a home.

MD: So, what kind of dog is Chumley? And I don’t just mean breed. I mean, personality.

CP: We think he’s a mix of poodle and Maltese. Just by his looks and behaviour. He’s very serious, very smart, very loving and cuddly but also fiercely protective, of me in particular. He sits by the door so I know when anyone is coming. He’s not yappy, thank goodness. And he’s a great traveller, which is good because I take him everywhere with me.

MD: As the baby of a bi-coastal couple, I suppose Chumley has a fair share of his own frequent flyer points. Any tips for people who may be debating whether or not they should fly with their dog?

CP: Get the dog used to the travel case. Make it a place they actually want to go… make it a safe place. We started early—before we took him on the plane—getting him used to the bag. We would put him in and give him a treat then we would drive to a park. So he would know there’s fun to be had. Now, he knows he’s going with us. We put the bag down and he jumps in it. He got it really quickly.

MD: Given that yours is perhaps a business that can be perceived as being somewhat superficial, how does Chumley help keep you and your husband grounded?

CP: You really nailed it on the head. In our profession there’s a real mercurial nature to everything. A lot of unknowns. It’s very erratic. There’s nothing steady about it. And having a pet is very steadying. It gives our day a focus. He gets four walks a day. And it’s us doing it—well, sometimes a dog walker depending on our schedules. It’s a way to get yourself out of the work and onto the ground. To focus on something that needs your attention…. He gets us out of our heads and into our hearts.

MD: Having two such busy television stars as a mom and dad, is it safe to assume Chumley knows his way around a set?

CP: Yeah, he does. He’s gotten used to the trailer. As long as we bring his bed. Sometimes it’s better for him, if both of us are working, if he’s at home and the dog walker comes. But if we have a light day on set, it’s so wonderful to have him in the trailer. Everyone loves him at work. They all fight over him… “Oh, can I walk him?”

MD: What have you learned about life from Chumley?

CP: I didn’t realize how big my heart could get. I feel it’s expanded tens of thousands of times. It reminds you that there are creatures in the world that need us. And I am pleased to know that I am there for him. It gives me a real sense of pride and love and purpose. We don’t have kids and we understand that he’s not a baby, but he’s a creature who can’t do things for himself and he needs us just the same. I’m glad he chose me.