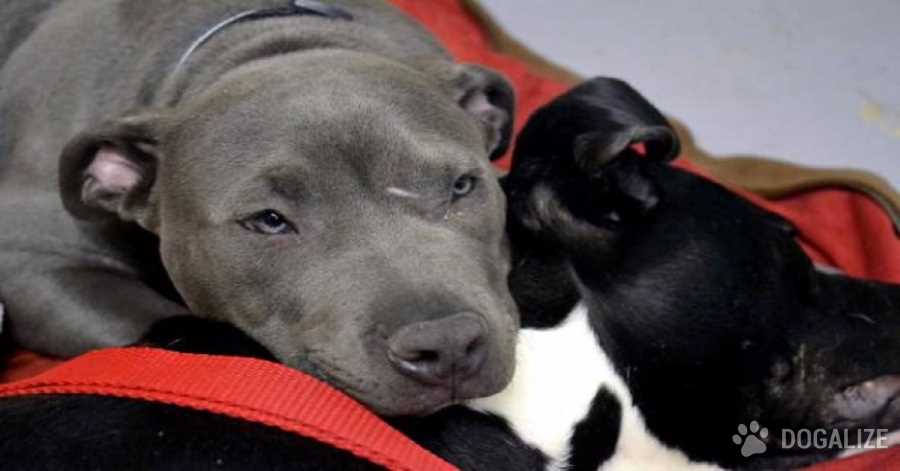 Pit Bull Has A Special Gift For Comforting Other Dogs | Dogalize

Dominic was still a puppy when he was rescued and taken in by a vet tech in Eaton, Colorado. As Dominic spent more time at the clinic it became clear he had a special gift for comforting the dogs who were recovering at the clinic.

Stephany Haswell, the rescuer, already had other dogs with whom Dominic got on well soon. He had a lot of energy as a puppy and Haswell started bringing him to work because her other dogs needed a break from his constant attempts at playing.

So, one day, a dog that just got out of surgery was placed on Dominic’s huge red pillow just outside the operating room. Dominic’s reaction was to immediately come and cuddle with the dog. Haswell didn’t think much of it, Dominic loves cuddling with everyone.

The following days, she saw Dominic laying with some dogs that were recovering from surgery and resting his head on their bodies whenever they would cry. The more a dog cried the more attention Dominic would pay to it. It became clear that Dominic had a special gift for comforting others.

Dominic now helps comfort and calms the dogs, and even some of the cats, after surgery. Dogs sometimes come out of surgery aggressively, occasionally biting, but with Dominic by their side the dogs wake up calm and happy.

“I’ve never, ever seen anything like this,” said Floss Blackburn, founder of Denkai. “He’s got such a sweet heart.”