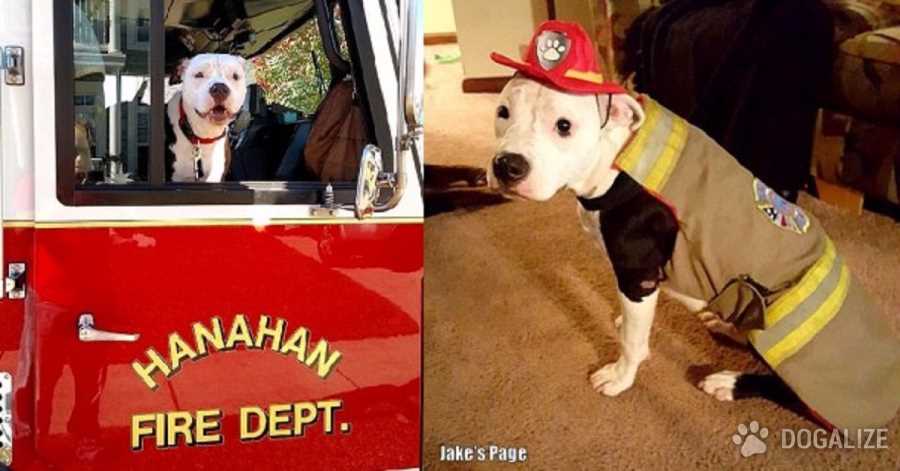 This is a happy ending story. Jake was only a few weeks old when he got badly burned in a fire. He was adopted by the fireman who saved his life, and now he has become an honorary firefighter himself.
Last Year, William Lindler of the Hanahan Fire Department in South Carolina was at home when he noticed smoke coming from his neighbor’s house. He grabbed his fire gear and rushed across the street. The neighbors yelled that their pit bull puppy was still inside, so Lindler braved the smoke and flames to save him.
Lindler managed to take the puppy off the flames, but the dog got the 75% of his skin burned. He was immediately taken to a medical center and then came the worst part of the story: the dog was abandoned there. Maybe the family couldn’t afford to pay the expensive medical bill…which cannot be a justification, anyway.
So, his fire rescuer decided to be his rescuer in life too. He adopted Jake and right from their first night together, they are inseparable. They are so happy together and there are big plans for his future.
“I would honestly like to get him certified to be a therapy dog for burned children,” Lindler explained. “I would like them to know that no matter how bad it is, this little guy beat the odds being burned as bad as he was at four weeks old and he’s still beautiful.”
If you’re curious about any news concerning dogs and other animals’ lifestyles, visit www.dogalize.com!