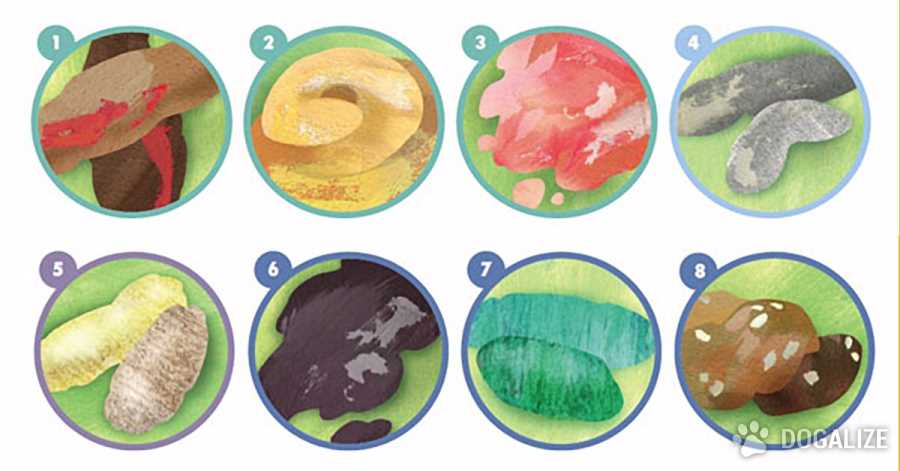 Your Dog’s Poop Tells A Lot About His Health | Dogalize

Your dog’s poop tells a lot about his health. It’s true! Paying attention to what escrement look like is a good way to know what’s going on with a dog’s health.
Color and consistency are very important. While normal stools can be many shades of brown, the following cases may indicate an underlying problem.

Streaks of bright red blood and/or mucus on the surface of a mostly normal, formed stool. This is generally caused by inflammation in the large intestine. It’s not an emergency, but it’s the case of paying more attention to your dog’s behavior and conditions.

Soft-formed to liquid brown diarrhea, with or without streaks of blood. As with the previous type, blood presence indicates an intestine inflammation, but it’s not alarming if it begins to improve within 24 to 48 hours.

A large volume of bloody, watery, diarrhea. This one does require immediate evaluation by your veterinarian, as it can be an indicator of a common condition called hemorrhagic gastroenteritis.

Black, tarry stools. This generally indicates bleeding somewhere higher up in the GI tract, such as the stomach or small intestine, and also requires an urgent trip to the vet. The appearance of the stool is due to the presence of digested blood, and can indicate that a large amount of blood is being lost.

Yellow-orange or pasty, light stools. This may indicate the development of liver or biliary disease, or a too-rapid transit through the small intestine to the colon. If this persits, an examination is required.

Grey, greasy stools. A possible signal of inadequate digestion and malabsorption of nutrient due to pancreas dysfunctions.

Green stools. It’s quite uncummon and may be due to poison ingestion. Go immediately to the vet.

Worms. Most of the times, you will not actually see worms in the stool. Worms are tipically diagnosed by looking for their eggs under the microscope. Occasionally, however, you may see white spaghetti-like or rice-like shapes in the stool, particularly with puppies. Seeing worms in the stool is not life-threatening, but you need to ask your vet for a medication.