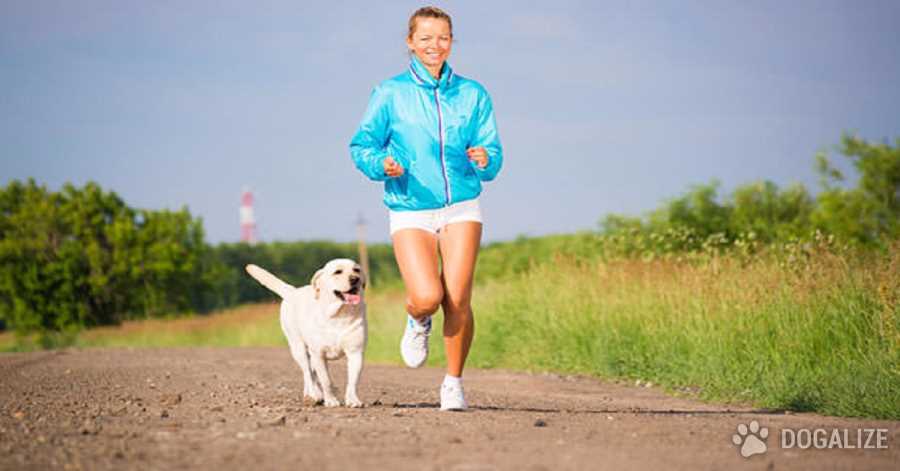 Running with your dog: some facts you should know | Dogalize

Dogs love to run. If running is your hobby or your passion, it makes sense to think about exercising alongside your dog. Running with a canine partner provides companionship and protection if you are nervous of being out and about alone. However, although dogs are keen to exercise, and to be with the person they love, not every dog is an ideal running-mate. Tiny dogs, such as chihuahuas for example, are out of the question. But there are other things you have to consider.

Don’t take a very young dog on your runs with you. Young dogs love exercise and they need it too. But it takes about 18 months for your puppy’s bones to be fully grown. If you take him for a long run before he reaches that age, you risk damaging his joints.

2) Don’t run with too heavy dogs

Large and heavy dogs may experience problems related to their joints with sustained running. Nature’s dog is a wolf, and the less wolfish your dog is in appearance and size, the more you may have to think about his special needs. Very large dogs look amazing but they can be too heavy for their own joints to support on a long or even medium distance run.

You need to think about your dog’s personality as well as her physical aptitudes. If your running territory is in a town, you don’t want a dog that hates or fears children or one that can’t resist running after every cat or squirrel that they see. You don’t want one that tugs on the lead every time an intriguing smell is detected. You don’t want to be aggressively protected by a dog who sees it as her duty to keep everyone else at a safe distance. Obedient and non-aggressive breeds, such as Labrador, are very good running mates!

You don’t necessarily have to avoid smaller dogs: some of them have what it takes. If you only want to run up to about three miles, then a smaller but energetic dog, such as the Jack Russel Terrier, may suit you.

5) A Husky is good for long distance runs

If you are in it for the long haul then you will need to think more carefully about getting a dog that is capable of real endurance. The breed that comes to mind immediately is the Husky.
Bred as long-distance sled dogs, there is no dog more suited to a long run, but not so much on hot summer days when they can overheat with their thick coats. Allow your Husky frequent stops to drink (every 20 minutes) and check with your vet that she is in good enough condition.

6) Consider the effect of hot weather

If you live in an area with scorching summer temperatures, then that will affect your dog even more than you.
Dogs can’t regulate their temperature by sweating like you can, and they can’t take their coats off. So don’t be cruel in hot weather. And if you live somewhere hot and want to run with your dog year-round, then bear the climate in mind when you choose the breed.
You want one with a long nose to help with breathing in the heat, and a short coat to minimize overheating. Rhodesian Ridgebacks are good runners and can go decent distances. They aren’t over heat-sensitive, as witnessed in their historic job of hunting lions in Africa, and they are affectionate pets.

Bulldogs and Boxers look like the sort of well-built muscular dog that might be able to run well for a distance.
In fact, they do not make good running companions. They have been bred to have very short noses and that can cause them breathing difficulties, even when they are relaxing.Any exercise makes that problem much worse, and could even prove dangerous to your Bulldog.