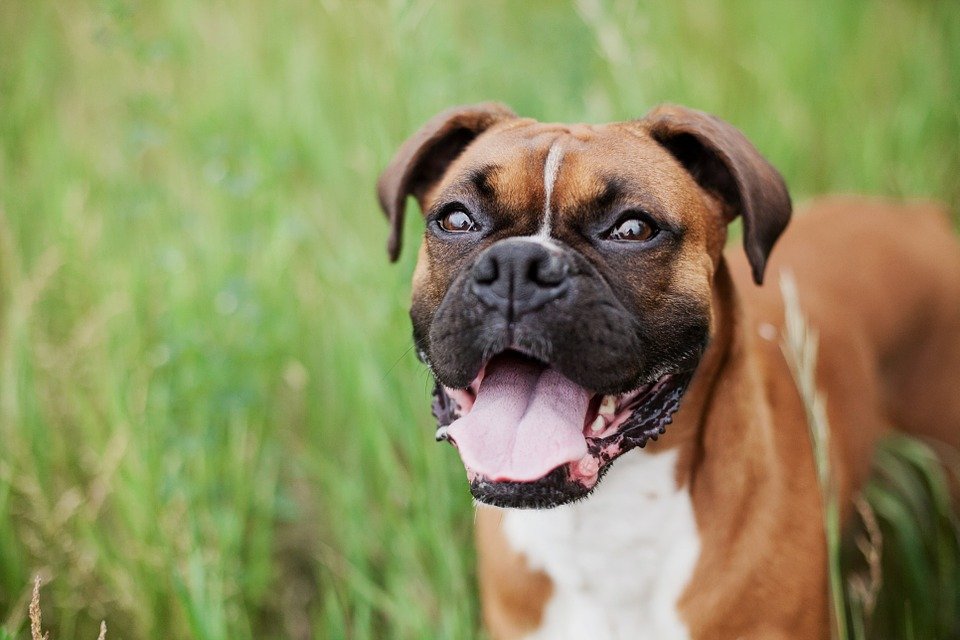 This beautiful breed, the Boxer dog, was initially conceived as a medium-sized dog. Today, it makes a great companion at most homes.  He gets his name from the fact that he will usually through his paws playfully as if he were actually boxing.

The Boxer dog was developed in Germany in the 19th century and is a direct descendant from the Bullenbeiser (a Mastiff descent) and British bulldogs. The Brabanter Bullenbeiser is now accepted as the direct ancestor of today´s Boxers.  These dogs were developed for the hunting of big animals such as bears and boars.

In the late 19th century it was introduced to other parts of Europe and came to the United States in the 20th century.  The AKC registered the first Boxer in 1904 and is the sixth most registered dog.

The Boxer dog can have any of three different coats: fawn, brindle, and white. Although you have probably not seen many white Boxers, these are not rare nor albinos. In fact, a little more than 18% of Boxers are white.

A Boxer dog typically weights from 60 to 70 pounds and stands from 20 to 25 inches tall. The skull is pretty distinctive and proportional to the body.  The hard bone structure of his skull is probably his most important characteristic.  Folds will always be present and the muzzle should have a 1:3 proportion length with the rest of the head.

The Boxer is a great companion and gets along pretty well with kids.  He is always alert and is very watchful.  He is usually not aggressive unless he senses his family is in danger.

Their temperament will depend on training and socialization. Boxer puppies will usually friendly approach humans.

Caring for a Boxer dog

These dogs are not really that high-maintenance.  They do not need much grooming and they do not shed that much.  They do need exercising and need to be active at all times.  Make sure you have the time to play with him and not just have him lay on the backyard.

They have a short coat, so it is best to keep them indoors.  Climates that are too cold or too hot will not suit the Boxer too well, they are more of a moderate type.

Training is imperative for this dog.  He is pretty average when it comes to training.  Always use positive reinforcements and he will come along pretty good.

Boxers are one of the dog breeds with the highest chances of getting cancer.

Follow us here in Dogalizeif you want more and updated information on dog breeds and how to better take care of your pet.