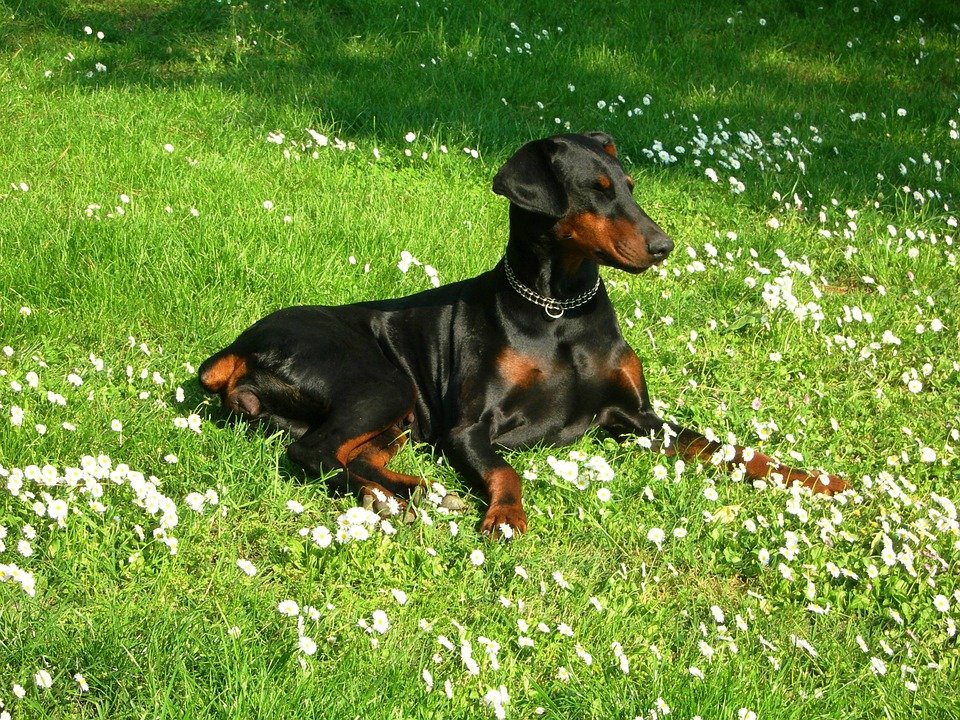 The Doberman Pinscher dog is a combination of several dog breeds.  He has an aristocratic pose with his pointed ears, muscular body, and sleek coat.

Around 1890 in the German town of Apolda lived a tax collector called Karl Friedrich Louis Dobermann.  His tax-collecting duties would usually take him to dangerous neighborhoods.  Being the owner of the Apolda pound, he experimented with breeds to create one that would protect him.  The result was the Doberman Pinscher dog.

This breed is relatively young, given that it was created at the end of the 19th century.  The Germans named the breed Doberman Pinscher in honor of Dobermann.

These dogs are medium sized with a short coat on a square built.  They are athletic dogs with a lot of stamina.  Males can be as high as 26 to 28 inches while the females stand at 24 to 26 inches tall.  They weigh from 60 to 80 pounds.

The Doberman Pinscher dog is a very active and very smart dog.  It is friendly and loyal.  It does not welcome strangers and his intimidating looks make him a very good guard dog.

Caring for a Doberman Pinscher

The Doberman Pinscher is a very active dog and requires a lot of daily exercise.  He does best in a large fenced backyard.  They should not be left alone for a long period of time nor should they be chained.  These are indoor dogs and should not be left by themselves outside in a backyard.

Owners will usually have their dogs tail-docked to make them more streamlined.  Their ears are usually cropped too when they are puppies to increase their hearing abilities. Consider the expense if you decide to dock your puppy’s tale and crop his ears.

They get cold during winters so you must protect them.  They usually love to sit next to the fireplace during cold weather.

With firm and consistent training this dog will learn to obey orders pretty quick.  This dog is very active, both physically and mentally, so it is best to keep him busy as much as possible.

Stay in touch here at Dogalize, we have lots of information on how to better take care of your Doberman.