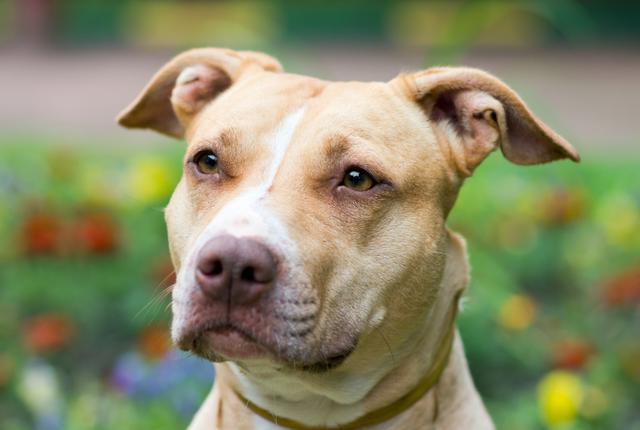 This loyal, protective, and overall nice dog is a family dog that started as a farm dog and ended up being a companion dog.  Usually confused with the American Staffordshire Terrier, the American pit bull terrier has been recognized by the United Kennel Club as a distinctive breed.

The American pit bull terrier is the result of the crossing between Old English Terriers and Old English Bulldogs. They were bred in England to combine the gaming of the terrier with the strength of the bulldog.  This dog breed was initially used as bull baits in England.  After such practice was banned in 1835, the pit bull was involved in many clandestine dog fights.

In the early 20th century, pit bulls were bred as catch dogs in America.  They were also used for hunting, driving livestock, and as family companions.

They stand at 18-20 inches for males and 17-18 inches for the females.  They have a wide range of weights, which can go from 30 to 80 pounds. Probably the most noticeable characteristic of the American pit bull terrier is his powerful jaw.   They are muscular and have little hair.

These dogs are people pets. They are good watchdogs as they will bark at strangers.  They are doing this to actually greet such stranger, but then, it works.  Not such good guard dogs as they are friendly to anyone.

It is a very friendly and protective dog with a playful nature.  It is very athletic and has the need to please people.

You will need to walk this dog every day at least one hour.  You can also play and/or exercise with him.  They do better indoors.  Not recommended for outdoors especially during cold weather since they do not tolerate the cold very much.

If you are planning on getting an American pit bull terrier, make sure you have the time and firmness to raise one.  In Dogalize, you can find useful information on how to better care for your dog.  Follow us to get updated ideas and tips.