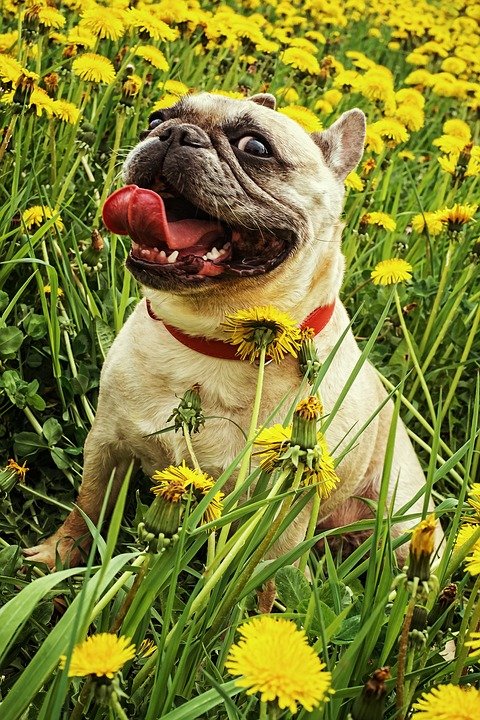 The French Bulldog is a small house dog designed to be a small companion version of the bulldog. Original from England he migrated with his English lacemaker owners to France.

Designed to be a toy version of the bulldog, the French bulldog originated in England. Lacemakers that migrated from Nottingham, England to France, they brought their tiny toy dogs with them.

The dogs thrived in France and Europe and it was soon brought to the United States.  The AKC recognized it in 1898, two years after being introduced at the Westminster Kennel Club show.

The French Bulldog must look like a muscular dog, heavy boned, compact, and with a smooth coat.  The male weighs 20 t0 28 pounds while the female 16 to 24 pounds.  Their height goes about 11 to 12 inches.

French Bulldogs make great companions.  They will not bark angrily, only when they need to call the attention.  These companion dogs need constant contact with humans.

Caring for a French Bulldog

There are some anatomical considerations if you are going to get yourself a “Frenchie”. They have a compromised respiratory system and large bulk.  Therefore, it impossible for them to regulate their body temperature effectively.  You need to put him a sweater if going out to a particularly cold weather.  During the summer, you need to be careful with the amount of exercise as he could suffer a heat stroke.

During the summer, you need to be careful with the amount of exercise as he could suffer a heat stroke.  They do not require much exercise except for a short daily walk.

These pups are free thinkers but they are intelligent and willing to please you.  If one training method is not working well, just move on to something else.

It is imperative for you to crate train this dog, even if he will be free at the house when adult.  This is a small dog and will chew on things, explore, and get into places they are not supposed to.

Keep these dogs from extreme temperatures as it can be lethal to them.  This is a brachycephalic breed, which means that since they have a snub nose, they find it hard to breathe when they are hot or under stress.  Several commercial airlines ban them from traveling because of this reason.

In Dogalize you will find useful information about other breeds and how to better take care of your pet.  Follow us and stay updated with new information.