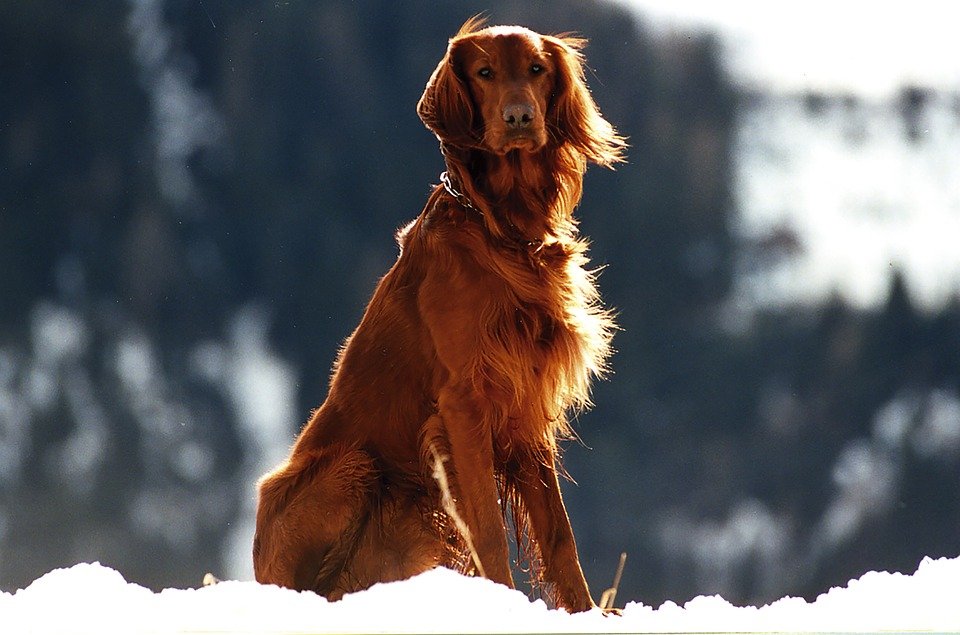 These enthusiastic Irish bird dogs became very popular due to their beautiful looks that include a mahogany coat. The Irish Setter dog is sweet, friendly, and energetic.

The Irish Setter was developed in Ireland in the 18th century.  They appear to be the result of combining pointers, spaniels, English Setters, and Gordon Setters.

The Irish Setter has a long silky coat.  They have a small waist and deep chest. The male stands at 27 inches and the female is 25 inches.  The male weighs around 70 pounds while the female weighs 60.

The Irish Setter dog is affectionate, sweet, outgoing, and very loving of people.  You have to keep him in a watch as he can also be pretty mischievous.

They are very protective of their family.  They make good watchdogs as they will bark at any stranger.

Caring for an Irish Setter dog

He is a hunting dog that loves to be active at all times.  The Irish Setter dog needs ample space to run.  They require at least one hour of daily exercise.  Since they have good stamina, you can take them with your for your jogging or bike riding.

Of course, this one will make an excellent hunting dog.  This Setter should live indoors with his family.

Training is important for this dog to avoid him getting bored.  He is actually intelligent and can be trained easily with a consistent and firm hand.  You need to place yourself as a leader and not use anger or physical force.  These dogs have the tendency of suffering from attention deficit disorder so you must always look for his attention.  Just keep him busy.

Avoid repetitive exercises and reward him with treats, play, or praise.