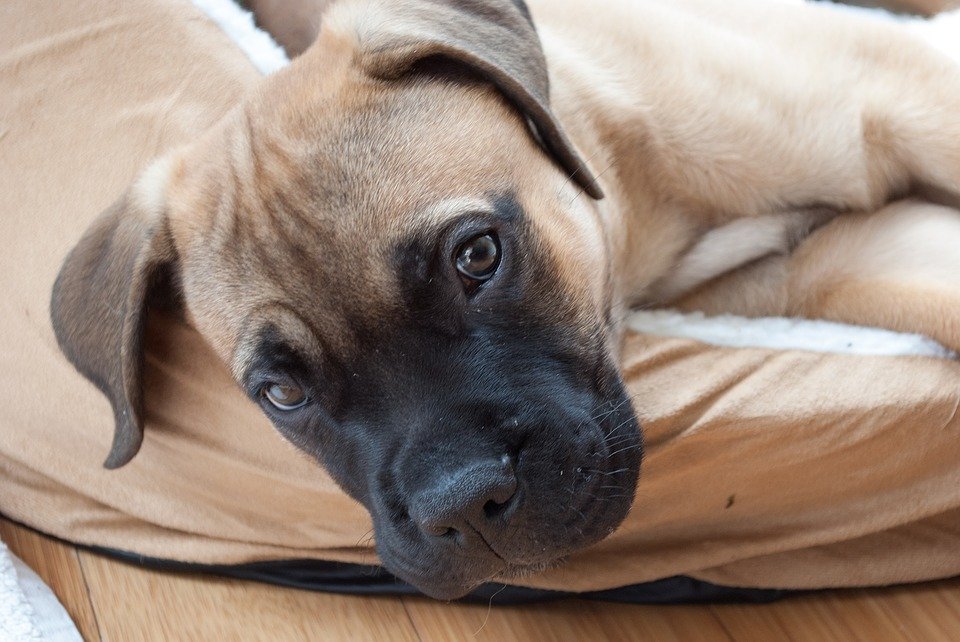 Massive is probably that comes to mind when you think of a Mastiff dog.  This is actually accurate as this beautiful dog is considered the largest dog breed in the world.  They are one of the most ancient types of dogs.

The Mastiff is a descendant from the molosser, thought to have originated in Tibet or northern India around 5,000 years ago.  There are depictions of the Mastiff dog in artistic ancient expressions from the Egyptian, Greek, and Babylonian civilizations.

For several thousand years they were war dogs and also served as guards, entertainment, and usually pitched to fight against lions and other wild animals.  In fact, Hannibal had trained war mastiffs with him when he crossed the Alps.

This dog breed was almost ended after 1835, until bear-baiting, bull-baiting, and dog fighting were outlawed. They were rescued in the mid-19th century thanks to the rise of dog shows.  The breed probably came to the United States during colonial times.

There are many Mastiff breeds but they all share the large and massive shape.  These are symmetrical dogs with an almost perfect frame.  The hieght for a male Mastiff is 30 inches while females stand at 27.5 inches.  Their weight goes from 130 to 220 pounds.

The terms to best describe the Mastiff dog probably are good-natured, sweet, courageous, docile and dignified.  He is usually nice to strangers.  However, if he sees that a member of his family is in danger he will stand fearlessly.  The Mastiff is usually shy and does not like conflict between family members.  So he will usually step in the middle of arguing family members or a parent punishing their child.

Caring for a Mastiff dog

Mastiff are easily adaptable but they do better in a home with a fenced yard.  They are not too demanding with exercise.  A 20 to 30-minute walk a day is usually enough.  Be careful not to over exercise puppies.  You can increase exercise after 18 months old.   Make sure you are able to identify when he is fatigued.  This dog knows no bounds when it comes to playing and even if he is very tired, he is just devoted to pleasing you.

If you have him outdoors, consider that he is massive and with a tail, which will easily knock up a small table.  Remove anything that you thing will be at the reach of the Mastiff.

The breed is usually easily housetrained.  Crate training is also recommended as this will help him with his housetraining. Training should be consistent and with postive reinforcement.  Probably the most essential training for this dog is obedience training.

In Dogalize we know everything there is to know about dogs and are willing to share it with you.  Connect with us to get fresh ideas on how to best take care of your pet.