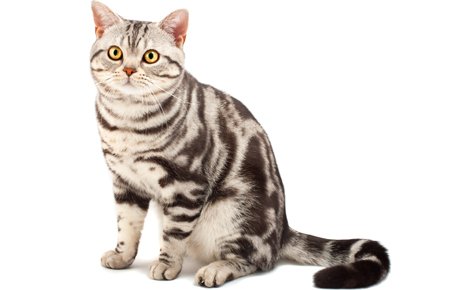 This sweet cat will be friends with your children, your neighbor, your dog, other pets, and, of course, you. The American Shorthair cat is a good-natured pet that has a great hunting ability. Today, it makes a great companion at any home.

When European settlers brought their boats to America, they usually carried working cats on board to control mice in their stores. One of them was the Mayflower, which arrived at Plymouth, Massachusetts in 1620. These cats landed in the New World, interbred, and developed to cope with the conditions of the new continent.

The ASH was valued in both land and sea as they were good at controlling mice, rats, and other vermin. To develop the cat´s special abilities they were selectively bred starting the 20th century. Today, the American Shorthair cat is a pedigreed cat with a strict standard. They were originally known as “Domestic Shorthair” but they were renamed American Shorthair to set them apart from the randombred shorthairs and to better represent its all-American origin.

The Cat Fanciers Association officially considered them as a breed in 1906.

This cat is large and has a powerfully built body, as a working cat he is. Their faces are round and their ears are short. The coat can have up to eighty colors, all recognized by the conformation standards. They weigh 7 to 12 pounds.

The American Shorthair cat is social and not too shy. He is not likely to hide under the couch when visitors arrive. They make wonderful companions that might not always want to sit on your lap but will always be appreciative of having a spot next to you on the couch.

American Shorthairs are usually calm cats with a moderate amount of energy. Due to their hunting nature, they enjoy puzzles and cat toys.

Caring for an American Shorthair cat

According to the Cat Fanciers Association, these cats are mostly low-maintenance. The hair is easily cared for and they do not shed profusely.  Mostly, you must only take care of the amount of food they eat as they will happily everything you put on the dish.

In Dogalize we have a lot of information on cats, cat care, and pretty much anything cat-related. Follow us and get in touch to find out more.