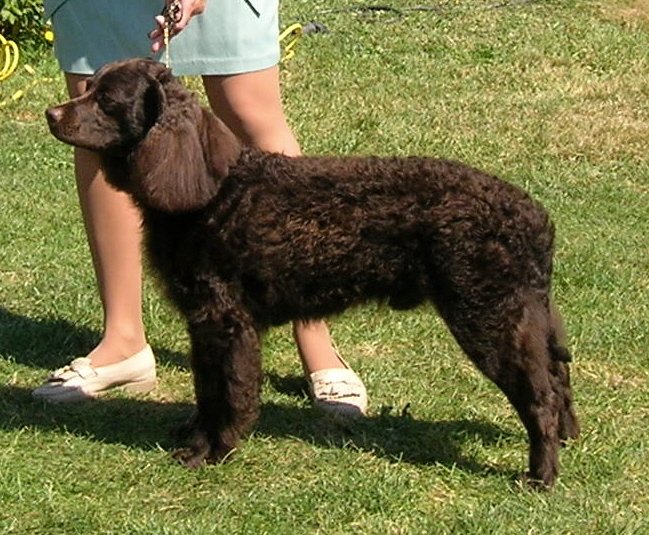 The American Water Spaniel dog is a medium-sized spaniel, developed for hunting. His coat is water resistant, making him a great swimmer and waterfowl retriever. Even though he is the Wisconsin state dog, they are a rare breed.

The American Water Spaniel dog was developed in Wisconsin during the 19th century. His ancestors include the Field Spaniel, the Irish Water Spaniel, and the Curly-Coated Retriever. He was developed to be a hunter. His thick double coat enables him to swim and retrieve duck, quail, pheasant, and grouse. His small size allows him to be close to his hunting owners inside the boat.

The American Kennel Club recognized The American Water Spaniel a breed in 1940. It remains a rare breed with an approximate 3,000 in existence today.

Due to its rareness and low popularity, the American Water Spaniel dog has not varied from what he looked like in the 1800s. They are a medium-sized dog. Their curly coat can be brown, liver, or chocolate. Males and females stand at 15 to 18 inches. Males, which tend to be slightly bigger than the females, weight 35 to 45 pounds. Females weight 25 to 40 pounds.

These dogs are lively, friendly, alert, and always ready for action. He enjoys human companionship and will bark if he gets bored and home alone. He can be very timid if he receives harsh treatment. Although this is a family dog, he will just get along with whoever gives him enough love and attention.

The American Water Spaniel dog can do well in an apartment or condo but only if you give him enough exercise and playful time. This dog loves the outdoors as a hunting dog he is. However, do not leave him in the backyard for too long time.

The AWS is smart and easy to train. Always use positive reinforcements on him as he does not respond well to harsh treatment. When his family is not home, he may chew on stuff, so crate training is important.