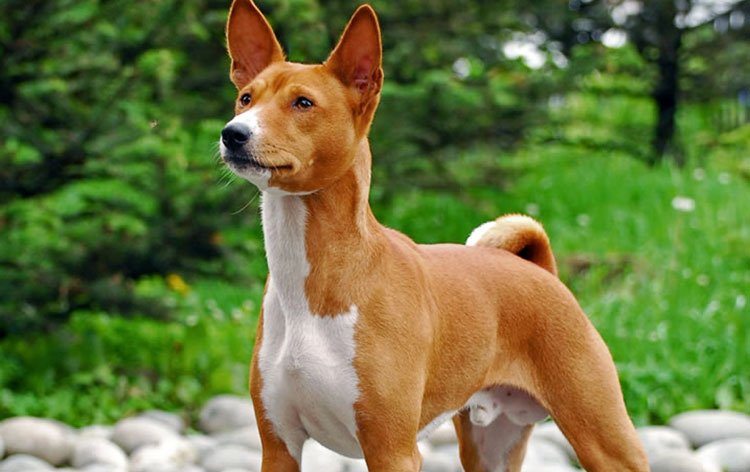 Do you feel you are up for the challenge of an energetic dog? Well, then maybe the Basenji dog is the one for you. Straight from Central Africa, this hunting dog was originally discovered in Congo. He is one smart and independent dog. Most kennels classify him as a Hound Dog, specifically a sight hound type. He will make a good companion, that if you can keep up, of course.

The Basenji were first discovered by Westerners in Africa in the 19th century. The Basenji dog was more valued than a wife in some African tribes. This was because of his amazing hunting skills and audacity. This is a silent dog, which is why many liked him for hunting trips. They usually only bark once and that’s it.

The first attempt to bring the Basenji dog to Europe since they would die from disease after arrival. It was not until 1930 when they were successfully introduced to Europe and America. The American Kennel Club officially recognized him a breed in 1943.

The Basenji dog has short hair, elegant neck and poise, and a tightly curled tail. They are squared, meaning that they are as long as they are tall. The typical dog has a weight of 22 to 24 pounds and can be 16 to 17 inches tall.

As a hound he is, the Basenji dog is independent and intelligent. They are pretty cunning when it comes to getting their way into the box of biscuits safely stored in the pantry. He will also chew on anything set before him. Whatever is small and moves, he will go after it.

He is always alert and not very well with strangers. They will become emotionally attached to only one human. The opposite will happen with any other non-canine pets. He does not bark but has this characteristic yodeling sound.

Caring for a Basenji dog

Provide him at least 30-minute walks in order for him to get enough exercise. But this is not all that will take to care for a Basenji. It is not safe to leave this dog alone in a backyard for too long time. They are accomplished escape artists. You neglect this fella and he will become a nowhere-to-be-found fella. Make sure your fence is secure and that he will not found anything to turn into a ladder. (Did we mention that he is an intelligent dog?)

If you have a wooden fence and bring in a Basenji here´s what you do: You put him on a leash for a while, you go and turn that fence the other way around in such a way that the smooth side faces inside. Then you hook up an electric wire on the top of this fence and you will probably deter him from escaping. Oh, and do not forget to get him off the leash once you are done.

According to a book called The Intelligence of Dogs, the Basenji dog is only the second hardest dog to train. You can spend months training him to obey, and he might, but only when he decides to. He survived a thousand years by himself without humans and sees no need to obey them.

Here in Dogalize we have information on this and many other interesting breeds. As you have seen, the Basenji does not have the need to please you, so unless you want to brag about how stubborn and destructive your dog is, you might want to consider other breeds. Check out the information, tips, and tricks we have for you.