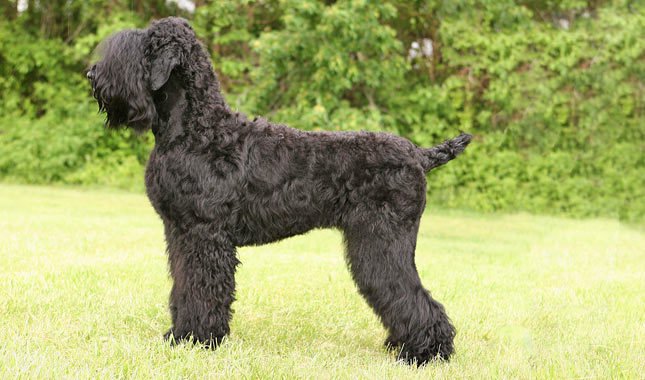 Muscle, large bone structure, a non-shedding beast, and a great guard dog are only some of the characteristics that make “The Black Pearls of Russia” such amazing, yet rare, dogs. The Black Russian Terrier dog is not a real terrier. This is a family dog that loves to be close to where all the action is taking place. These majestic dogs are assigned a series of tasks that include protecting the family, playing with the children, and be super cute, which they particularly excel at.

The Black Russian Terrier dog was developed by Soviet scientists during the Cold War. They were looking for a working dog that would help soldiers patrol the border along soldiers. This dog had to be able to endure Russian winters.

Black Terriers arrived at American between 1989 and 1990.  The ACK officially recognized it as a breed in 2004.

The Black Russian Terrier dog is covered by a double coat, a coarse outer coat, and a softer inner coat.  This coat is also dense, hard, woolly, frisky or silky. These working dogs can be as tall as 27 to 30 inches in the case of the male and 26 to 29 for females. The usual weight for the males is 110 to 132 pounds and the females can weigh between 99 to 110 lbs.

These dogs were created by the Soviet Army, so some of his personality traits come as no surprise. He is courageous, confident and calm. The Black Russian Terrier dog was designed to protect and that is exactly what they do.

They love their family and will do anything to protect you. They are family pets and want to be as close to them as possible. So leaving a Blackie alone in the laundry area for too long time will make him pretty sad, and destructive.

One of the first things that you need to know about a Blackie is that they are working dogs. But not just any type of working dog. This little fella needs to have a job to perform every day. He needs at least a 30-minute walk every day.

The high intelligence of this dog makes him fairly easy to train. As with any dog, use a firm but gentle hand. It is also important to socialize your pet.