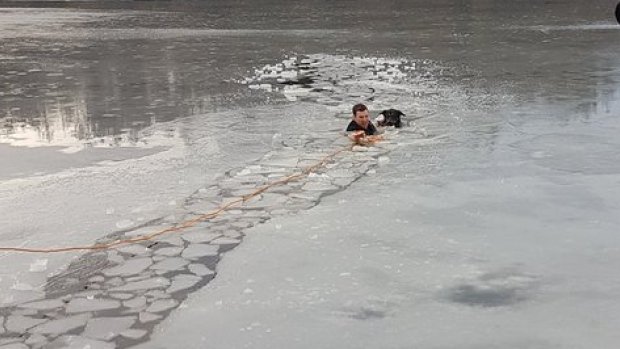 Dog rescue from frozen lake by a Police Officer

Dog rescue at Stanley Park’s Lost Lagoon: some witnesses contacted police officers when they saw a dog fell in the icy lake. The mixed-breed dog plunge through the ice and owes his life to Peter Colenutt, the Vancouver Police Constable who rescued him, jumping into the water.

The pooch was playing on the frozen surface of the lake, chasing a ball, when he fell in the cold water. The poor dog became stranged by the floating ice and coudn’t swim in the Stanley Park’s Lost Lagoon. Some people saw the mixed-breed dog in the icy lake and called the police. When officers arrived, Peter Colenutt run to save the dog. He stripped off his shoes, socks and coat and waded into the lake. He was wearing only his uniform and a rescue rope.

Constable Colenutt reached the dog and saved him. The puppy and the officer were both pretty chilly, but thankfully they were okay. On Twitter appeared photos of the scene, with a lot of likes, shares and grateful comments.

The dog is well but there are no information about why he was playing on the lake surface or not he has an owner. Some witnesses sayd the dog was chasing a bird, but then it was confirmed that the puppy was playing with a ball. However, the dog was very lucky and he has to thank the officer, for his prompt intervention and for saving his life. The Constable Colenutt feels the people love on social media and was very happy to see the puppy was okay.