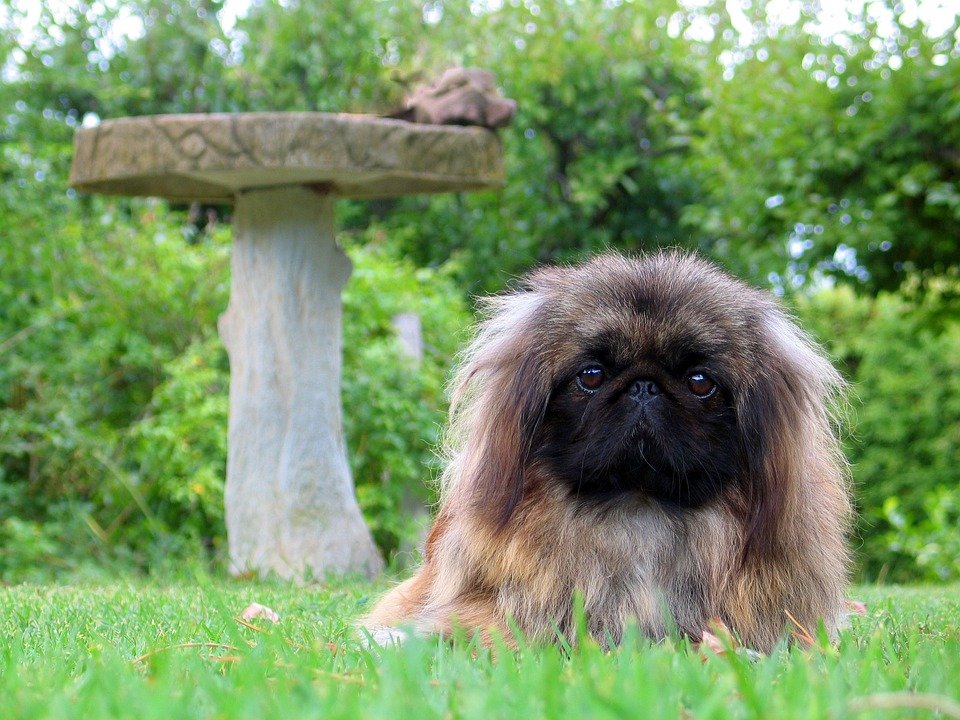 The Pekingese dog is a small dog, historically known for being the companion of the imperial family of China.  Today, they are still companion dogs for many families.

DNA tests have revealed that the Pekingese breed is one of the most ancient ones.  They are originally from antique China.  They were in the ownership of the Chinese imperial family for centuries where they were jealously kept inside temples.  British and French troops entered the Old Summer Palace in Beijing during the Second Opium War in 1860.  There they found an elderly aunt of the fleeing emperor, who killed herself, with her five Pekingese.  Right after these were removed, they called the attention of the Western World.

By 1890, more and more Pekingese were smuggled out of China.  The first one to be exhibited in Britain was one named Pekin Peter in 1894.  The AKC recognized Rascal, the first dog to come to USA, in 1906.

Besides his long coat, the flat face and large eyes are probably the most prominent features of the Pekingese dog.  This is a compact dog with a muscular and low body.  They weigh 7 to 14 pounds are stand at 6 to 9 inches, which makes them a heavy dog for their size.

When you think of the Pekingese dog breed, you think of dignity, confidence, and self-importance.  It is like he knows that he was an imperial dog and behaves like it.  He is good-natured, sweet, and loving.

The Pekingese dog is very protective of his family and he will loudly bark at any stranger.

Caring for a Pekingese dog

Due to their size, they can do well in an apartment.  But they also enjoy being in a backyard with a fence.  They need walks outside and will make great companions if you go out for a jog.  They have a heavy coat but these are indoor dogs as they do not tolerate weather too well.  Due to their short noses, they are sensitive to heat.

The Pekingese breed has a hairy coat and requires at least an hourly grooming session every week.

Train him with firm and constant hand.  Use positive reinforcements such as food and praise to promote good behavior.  The Pekingese dog is an intelligent one and should not be difficult to train.

In Dogalize we have all you need to know to take better care of your pooch.  You will find all the information you need about care, veterinarians, diseases, and pretty much everything dog-related.