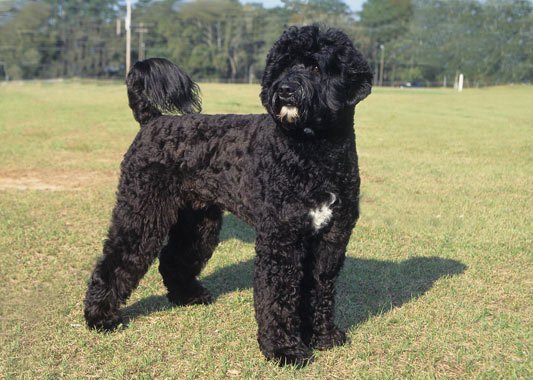 The Portuguese Water Dog is a medium-sized, muscular dog with straight ears. He can be as high as 20.0 to 22 inches and weigh 42–55 pounds. He has heart-shaped ears, that are set high and hanging. His coat is thick and is either curly or wavy in texture. Coat colors come in black, white, various shades of brown, parti-colors of white with dark spots, black or brown with white markings, silver fox and gray.

The Portuguese Water Dog is a loyal, lively, water-loving dog. But he’s also a natural retriever, indeed this water dog is a very mouthy dog: he will pick up everything in his path, chew up both edible and inedible objects, and try to gnaw on your hands.

What does he need?

Since this water dog he’s very lively and athletic, he needs vigorous exercise: long walks, occasional runs, and swimming whenever possible; in fact, the Portuguese Water Dog is a master swimmer and diver. He also needs daily mental exercise. While out on the walk the dog must be made to heel beside or behind the person holding the lead, as in a dog’s mind the leader leads the way, and that leader needs to be the human.

Curiosities about his origins

The Portuguese Water Dog, as the name suggests, is native to Portugal. In his native land he is called the “Cão de Água”, which means “dog of water.” This dog worked alongside Portuguese fisherman for hundreds of years doing numerous jobs. He was so valuable he was considered part of the crew. This water dog worked herding and catching fish, retrieving broken nets or anything that fell into the water, carrying messages from one ship to the other and even guarded the boats in foreign ports.

The dogs were so popular even non-commercial fishermen could rent one for their fishing trips.