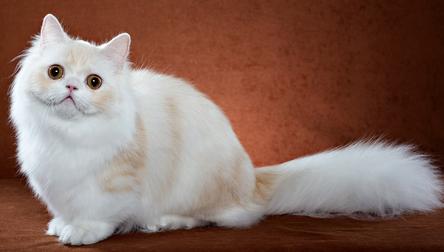 The Napoleon Cat (Minuet cat) is the result of crossing the Munchkin cat with a Persian cat. The idea behind his breeding was to have the cute physical appearance of the Munchkin and the face of the Persian.

Joseph B.Smith created the breed inspired by the Wall Street’s Journal cover page of the Munchkin cat in 1995. The Basset Hound Breeder and AKC judge though that the Munchkin was too indistinguishable from other cat breeds. So he thought something had to be done about it.

TICA considers the Napoleon cat as a domestic hybrid breed. In 2015, TICA’s board decided to change the name to Minuet cat (probably because of the misconception that Napoleon, who inspired the name, was short). It still goes by the name Napoleon in the Cat Fanciers Federation.

This breed is fairly new and has a striking face appearance known as “baby doll face”.  A litter will usually include short-legged and long-legged kittens. The beautiful appearance of the Minuet cat took the world by storm when it was first introduced.

The cat is firm, muscular, and with a strong built. This is not a short-legged Persian nor a hairy Munchkin; it is a hybrid that has a beautiful combination of both.

These cats are great for indoor living. The cats are not too vocal nor demanding. They have a sweet and affectionate nature. Their mellow personality makes them perfect to live with other pets and playful, especially with children. They might not have the mobility of a long-legged cat but they are certainly curious and inquisitive.

The Minuet cat is warm and sociable and are always in for cuddling. They make great companion pets as they love to be around their people. In fact, it is not a good idea to leave this cat alone for a too long time.

Caring for a Napoleon cat

Make sure you obtain your cat from a reputable breeder. Napoleon cats are prone to certain diseases, such as PKD (Polycystic Kidney Disease) which they might inherit from the Persian cat. Groom their coat once a week to prevent matting.

Taking care of a Minuet cat can be a challenge. But don´t worry, here in Dogalize we got you covered. Check out all the resources we have for you and your cat.