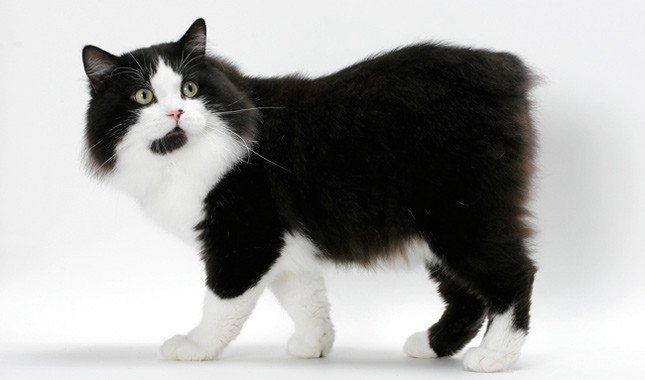 There certainly are many cats born with a small tail or no tail at all. But the Cymric and the Manx are the only ones bred with that purpose. The Cymric cat, also known as Manx Longhair, is the only cat breed that accepts the presence of no tail or a little dimple where the tail should be.

The story of these cats begins in 1750 on the island of Man, off the coast of Great Britain. It is unclear if a tailless cat originated there or migrated. The truth is that the island became very popular for its cats with no tail. This is why these cats were called Manx. The Cat Fancier’s Association has long recognized the Manx as a breed. But a longhaired version of the Manx was accepted and known as Cymric in 1994.

Some associations recognize the Manx and Cymric cats as a separate breed. Very few still considered the Cymric cat or Manx Longhair as a hairier version of the Manx.

The Cymric cat and the Manx are similar cats, except for the length of the coat. The cats are muscular, strongly built and with a firm bone structure. When you look at one, it has an unusual round appearance.

Their coat is medium-length, dense and well-distributed around the body. All the coat color standards for the Cymric cat are the same for the Manx.

These cats are pretty good at catching mice, or anything that looks suspicious around the house. This makes them a great “watchcat” against small animals and stray dogs. This cat will stand and growl against any mouse or rat you might have so you might as well kiss them goodbye.

In general, this cat is affectionate, mellow, and even-tempered. He is very playful and loves to follow his owner around the house. The Manx Longhair can learn tricks and walk on a leash if taught early.

Caring for a Cymric cat

You need to groom the Cymric cat a couple of times a week to remove dead hair. Just make sure you clean off any feces remain on the fur surrounding the anus.

In Dogalize we know how important your cat is to you. We have many resources for you to check out. You can contact us to learn more.