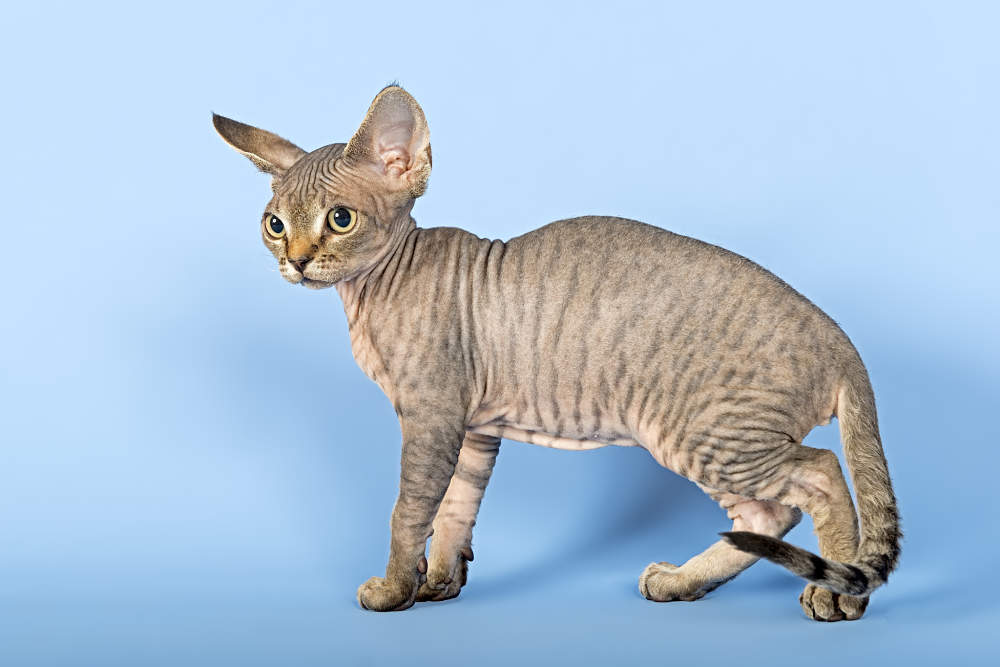 The principal characteristics that make the Devon Rex cat recognizable and special are his wavy hair, slender body, and large ears. These are highly intelligent cats that love people and welcome the attention of friends and family.

Kirlee, a kitten born in England in 1959, is the progenitor of a new breed, the Devon Rex cats. Initially, it was thought that Kirlee shared the same genetic composition as the Cornish Rex, but genetic testing proved otherwise. Kirlee had a wavy coat but very little is known about his ancestry. Beryl Cox discovered the first Devon in 1960 in Buckfastleigh, Devon, UK.

The Devon Rex gets his name from his birthplace, Devonshire, and the “Rex” comes from his resemblance to the rex rabbit, wich also has wavy hair. In 1968, a Devon Rex cat was brought to the United States. The Cat Fancier’s Association fully recognized the breed in 1979.

The particular hair of the Devon Rex cat is due to a mutation. These medium sized cats are sometimes named “pixie cats” or “alien cats” because of their singular appearance.  The most obvious characteristics are their long hairs, wide eyes, and slender body.

Their whiskers are very tiny, such that at first glance it appears as if he does not have any. His legs are long and sturdy and the paws are unusually large. The Devon Rex can weigh 5 to 10 pounds.

This cat will stay with you since he wants to be involved in all the family activities. His voice is very quiet but he might become quite vocal.

This cat is smart and would like to learn a trick or two and play games. He is moderately active and loves attention from friends and family.  He will love to sleep under covers or any other warm and cozy spot.

Caring for a Devon Rex cat

Buy this cat toys to keep him entertained while you are not in the house. He is not in constant motion but he might require your attention when you are in the house. The coat is pretty easy to take care of.  Fortunately, this cat is not a shedder.

If you want to learn more about other cat breeds to make a better decision on your next cat, you should check out Dogalize. We have all the information you need to get yourself a brand new pet. Follow us for more information.