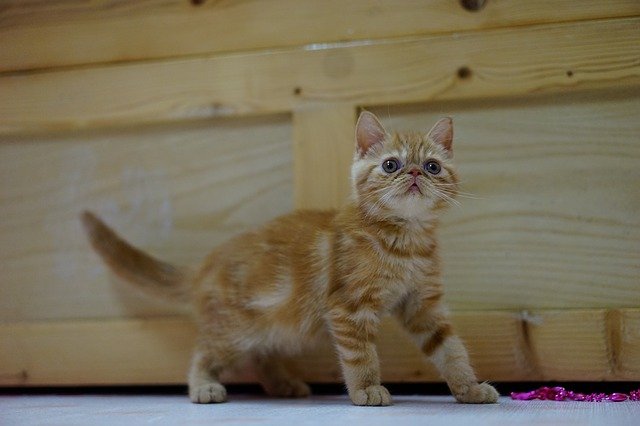 The Exotic Shorthair cat, created to be a shorthair version of the Persian cat, is a docile and cute cat to have at home. Although it may seem that he is simply an ornament in the room, the truth is that this buddy loves to play and be sitting in your lap.

The Cat Fancier’s Association recognized the Exotic Shorthair cat as a breed in 1967.  In some places, he is known as Exotic Shorthair to distinguish it from the Exotic Longhair that sometimes appears in some litters and some consider it to be a distinct breed.

The standard for the Exotic Shorthair cat are the same as for the Persian with the exception of the coat. Their short and thick neck stands out as well as the coat which, although short, is longer than short hair breeds. These medium-sized cats can weigh from 6 to 12 pounds.

These cats are friendly, docile, and affectionate. In this, they are very similar to their Persian cousins. However, they are more active and live better with a rather active family. Usually, they will follow their owners everywhere and patiently wait for their attention. They love toys; they may be playing until you wear out but they can also just play by themselves when nobody is at home.

Caring for an Exotic Shorthair cat

These cats are quiet so there will be no problems with meowing. The Exotic Shorthair cat’s needs are not many: regular food, play time, and lots of love. It is necessary to comb them about two times a week to remove dead hair. A bath a month should be enough. These cats discharge a lot from their eyes, so it is a good idea to clean the area around the eyes to prevent staining.