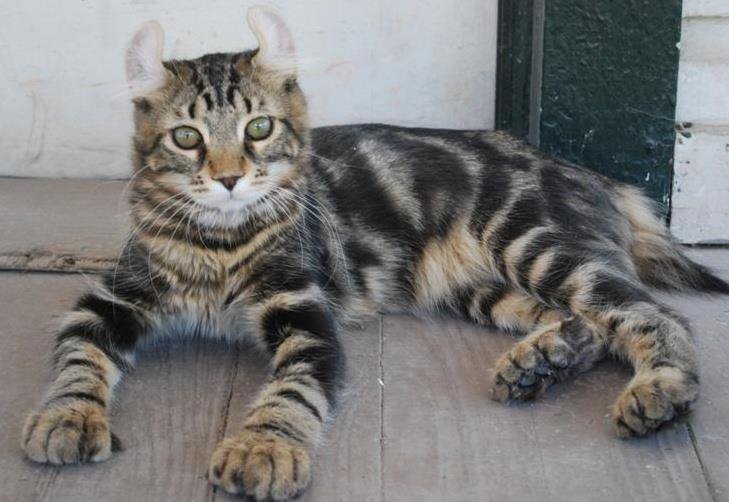 The Highlander cat is one that loves to draw attention towards him. Given his large cat appearance, this usually not a problem for him. His curled ears also help to the striking appearance of this cat.

This breed started its development in 1993, but its refinement began in 2004. The idea was to create a sweet domestic cat with a “large cat” appearance. The name was established in 2005 and breeders focused on defining its characteristics to obtain championship status in TICA.  The breed obtained such status on May 1, 2008.

The nose, muzzle, and chin of the Highlander cat give them a square boxy look. This, along with the long sloping forehead and medium to large eyes makes their face look longer than it is wide.

The unique appearance of the Highlander cat comes from the cross between the Desert Lynx and the Jungle Curl breeds. Just like the Desert Lynx, it has a bobtail and spotted or marbled markings. They possess a sturdy and muscular body. Females can weigh between 10 and 14 pounds while males can be 15 to 20 pounds in weight.

The Highlander cat loves to play and being silly. He is great with humans, loving and affectionate. He is also very active and confident. They are not really that vocal although they will gently purr when in need of your affection. When he is happy and cheerful he will wag his tail like a dog. This makes the tail an important means of expression for the cat.

Caring for a Highlander cat

The Highlander cat may come in short or long hair. The long hair version requires grooming twice a week. These cats have no known health issues. They also love to play with water so try to provide a basin of water for him to vent.

This is definitively one loving cat to own. In Dogalize we have information on many other cat breeds that you might want to check out as well as tips and tricks on how to best care for your feline companion.