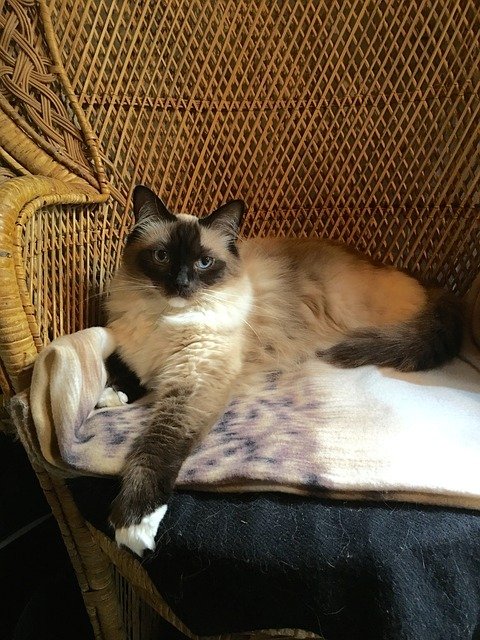 The breeding of the Himalayan Cat or Colorpoint Siamese began in 1931. Breeders initially just wanted to know how was the colorpoint gene passed on. After intensive selective breeding, Virginia Cobb and Clyde Keeler obtained a long haired cat with the colorpoints of the Siamese.

The Cat Fancier’s Association considers the Himalayan cat simply a variation of the Persian, instead of a separate cat breed. They can only be crossed with Persian cats as the Siamese has been separated from the breeding program.

The Himalayan cat or Colorpoint Siamese has the same appearance of the Persian, only maybe shorter legs, which makes it more difficult for him to jump. Since the 1960s, though, these cats started looking more like Siamese with longer legs.

Their coat has a white or cream bulk plus the colorpoint which can be blue, seal, lilac, red, cream, or chocolate. This is a medium-sized cat that usually weighs between 7 to 12 pounds.

The Himalayan cat is sweet, quiet, and docile, pretty much like the Persian cat. They are also affectionate but they are also discriminating. They will keep their affection only for those he loves and strangers that have earned his trust.

The Himalayan cat enjoys homes with simple lives and that are not too active. With their soft and almost musical voice, they will express their simple needs: regular meals, playtime with catnip toys, and lots of love, which they will return happily. This is not the type of cat that will jump on your furniture, cling to your curtains, or be on top of your refrigerator.

Caring for a Himalayan cat

It is very important for you to know that a Himalayan cat´s hair needs to be groomed on a daily basis. This must be done to prevent the coat from tangling. A monthly bath is all they need, too.

Here in Dogalize we have plenty of resources to help you better take care of your cat. Follow us to learn more about cat care and everything cat-related.