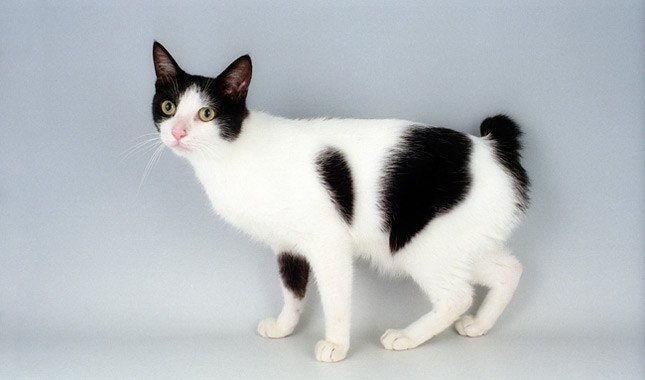 If you are looking for a cat that will virtually interact with you, sit to read the paper, watch TV with you, and whatnot, then the Japanese Bobtail cat is the one for you. This always playful cat is a cute addition of affection and love.

The Japanese Bobtail cat has been around in Japan for at least 1,000 years. Some even say that these cats arrived in Japan as presents from the Chinese emperor to the Emperor of Japan. The “bunny” tail occurred naturally but was then set through natural selection.

Today, the cat is a symbol of good luck. The first set of Japanese Bobtail to arrive at the United States did so in 1968.  The Cat Fancier’s Association recognized the shorthaired version in 1976 while the longhaired version got it in 1993.

The back legs of this cat are slightly longer than the front ones. The head of the Japanese Bobtail cat forms an equilateral triangle. They have an oriental look, mainly due to their eyes which are not round but oval-shaped.

Of course, the most prominent feature of the cat is the bobtail, which interestingly, is not only unique to this breed but it also is for every cat. No tails from any Japanese Bobtail cat´s are the same.

The Japanese Bobcat is very people-oriented, loving, always playful, energetic, and happy. They want to be a part of each and every one of the activities performed at home. Therefore, there will be there with you helping you read the paper, do exercise, perform house chores, etc. They can easily adjust to other pets and are nice with children.

Caring for a Japanese Bobtail cat

Both the shorthaired and longhaired versions of the Japanese Bobtail cat are easy to groom since the undercoat is very short in both cases. A bath is rarely necessary due to the coat being water resistant. This cat loves to play and be around his family. So he will always go with you everywhere.