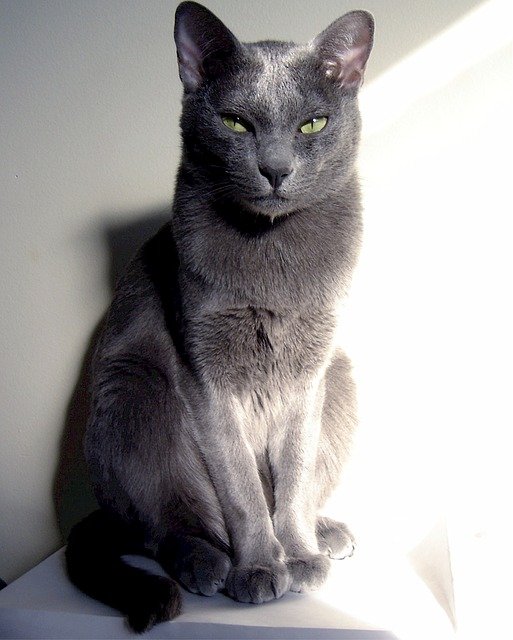 The Korat cat is a breed of blue-grey domestic cat with a small to medium build. This cat has been around for a long time since registries of its existence go back to the 14th century.

This cat breed originated in Thailand where they are also known as Si-Sawat cat. The first time we read about him is the in literature of the 14th century. Back then, they were considered lucky charms. Giving one to a bride had an important significance since people associated them with fertility and prosperity.

The name comes from Korat, a region located in northeast Thailand. The time in which they were brought to the west is unclear. The first report of Korat cat importation is from 1959. The Cat Fanciers Association gave the breed official recognition in 1967.

The Korat cat has a low body fat but is unusually heavy for its size. His small to medium built body is covered with a short coat with silver tips and lighter silver blue roots. This makes the cat appear to shimmer. This silver blue coloration is the only one accepted for the Korat. The eyes of this ancient cat are large and emerald green color. He can weigh from 6 to 8 pounds.

People used to give Korats as gifts, usually in pairs. There is probably a reason for that as this cat is not a loner. He will follow you everywhere you go and give you his opinion on things. They can easily adapt to a new home. When it comes to showing their affection, they will do so with whoever shows them love.

They are playful cats who enjoy learning new tricks.

Caring for a Korat cat

If you do not have someone with your Korat cat all the time, know that if he is left alone for too long, he will become destructive. If possible, get them in pairs. As for this coat, it is actually short and needs very little grooming.

Follow us here in Dogalize to learn more about other cat breeds. We have tons of resources for you to learn new tricks on how to best take care of your feline pet.