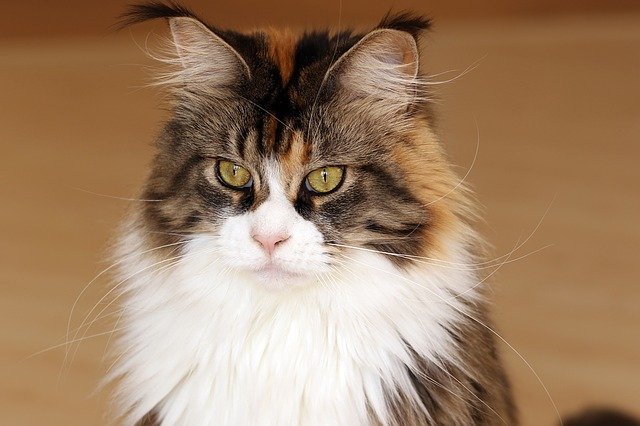 The Maine Coon cat is a domestic cat originated in the United States, specifically in the State of Maine. The ancestral origins of this big cat are unknown. It is the largest breed of cat.

We only have speculations and folktales about the origin of these cats. One well-known tale has to do with Marie-Antoinette, the beheaded Queen of France during the French Revolution. According to the story, when Marie-Antoniette tried to flee, she picked up her most precious possessions with her, including six Angoras. She was beheaded in 1793, but her cats did make it to the United States where they were crossed with short hair breeds, giving rise to the Maine Coon cat.

The Maine Coon cat has a strong body with a solid built. This cat was developed to be a mouser, a farm cat and above all, a boat cat. At least it was like this until the 19th century. This probably explains its large size. In fact they are the largest domestic cats.

A Maine Coon cat named Stewie, was recognized by the Guinness Book of Records in 2010, as the world’s largest cat. Stewie was 48.5 inches from the nose to the tip of the tail. Usually, these soft, silky fur cats measure between 10 and 16 inches high and reach lengths of up to 48 in.  The male´s weight goes between 13 and 18 pounds while females can weigh between 8 and 12 pounds.

The Maine Coon cat has a varied personality. He is a very affectionate cat that usually follows their owners everywhere but is an independent cat. He likes attention but if cannot provide it, he will be happy with only supervising you.

His mouse-hunting nature remains intact. No mouse is safe in a house where a Maine Coon cat lives. If he doesn´t find mice, he will practice with any small toy.

Caring for a Maine Coon cat

This is a cat that needs to be active and playing physical and mental games to stay stimulated. It is necessary to groom them about two times a week to remove dead hair.

If you want to know more about other breeds of cats and how to take better care of your pet, follow us here at Dogalize. We have a large number of resources that will find very useful.