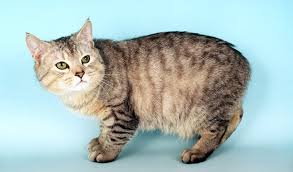 From the Isle of Man, off the coast of Britain comes the tailless Manx cat. The genetic mutation that resulted in this lack of tail gives the Manx a characteristic trait.

The Manx cat is certainly not the only tailless breed but, along with the longhaired Cymric, is the only cat breed that was intentionally bred to have no tail. Their origin goes back to 1750 but we do not know if tailless cats originated in Man or were brought there. The island did become famous for its cats with no tail and then it gave this cat its name.

Not all Manx cats lack a tail, despite this being one of his trademarks. As a matter of fact, they are classified according to the length of the tails:

They are small to medium-sized cats that weigh from 8 to 12 pounds. The head of the cat is round over a long neck. The double coat can be short or long and of silky texture.

This is one mellow, even-tempered, and affectionate cat. He was developed to be a mouser and still keeps that instinct. If he sees a stranger approaching the house, he will growl and maybe even attack. He will be at ease when he sees that you are handling the situation. In fact, they can react lovingly with strangers.

They are intelligent cats and can learn new tricks, including fetch. Being an island cat, he enjoys playing with water.

Caring for a Manx cat

Grooming his coat once a week should be enough for a Manx cat. Make sure you also stimulate your cat by playing mind-challenging games.

We know how devoted you are to your loving cat and companion. This is why we have lots of resources on cat care for you to check out here in Dogalize.