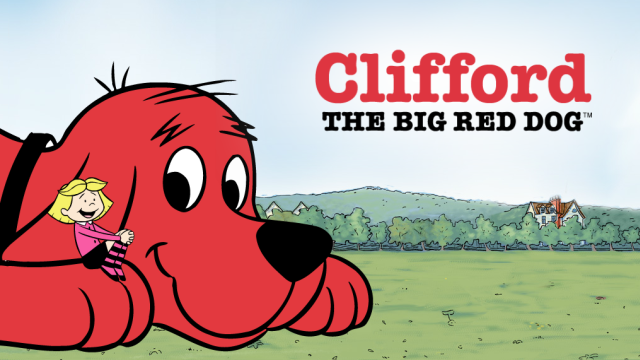 You probably found many illustrated books about Clifford the Big Red Dog. This is an American children´s book series about a giant red dog named Clifford.

Clifford is an “all-around” giant dog. He is nice, affectionate, friendly, loyal, and sometimes shy. His size is inconsistent throughout all the series, appearing bigger in some books than in others. His owner is Emily Elizabeth, a curious and friendly eight-year-old girl. Clifford was created by Norman Bridwell, who conceived him through a sketch of his own of this little girl riding his horse-size bloodhound.

Originally, Clifford was supposed to be a giant bloodhound. Today, he looks like a Labrador Retriever/Vizsla cross.

The books were published by Scholastic, and Clifford became so iconic to them that he is now their official mascot. The first book of the series was published in 1963 followed by a large number of books that now make a total collection of 80 books. Clifford the Big Red Dog established Scholastic as a premier publishing company.

The animated children´s television series based on the children´s books aired in PBS kids from September 4, 2000, through February 23, 2005. Every episode had two 15-minute sketches. In one of them, Clifford would interact with some other friends while the other half was more about his interaction with Emily, his owner.

John Ritter voiced Clifford in all episodes. He died on September 3, 2003. No new episodes were filmed after that.

Warner Bros. released Clifford the Big Red Dog as a movie in 2004. This was Ritter´s last film.  It was dedicated to his memory and it was also the series finale. The film features Clifford, Cleo, and T-Bone joining an animal show to win the lifetime supply of food.

Certainly, we grew up reading and enjoying the adventures of Clifford the Big Red Dog. Stay with us here in Dogalize to learn more about real-life dogs and how to take care of them. We have interesting stories, links, and resources for you.