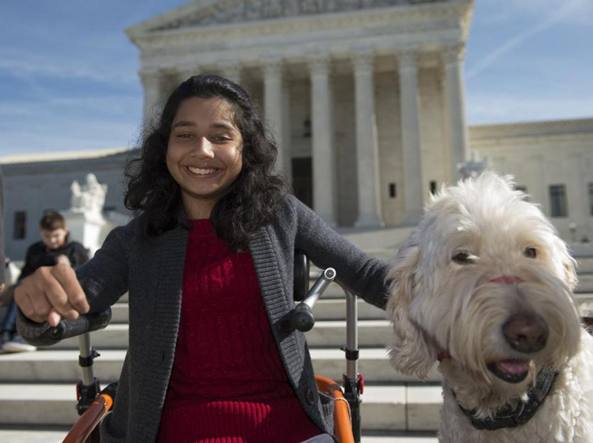 Dog aid: allowed in a Michigan’s school a medical dog for a disabled girl

Victory for the dog aid movement: a girl in Michigan, Ehlena (13 year old), managed to obtain from the Supreme Court the unlimited access of her dog, named Wonder, to hers school’s lessons.

The fact is that Ehlena cannot live without her dog: she infact has been diagnosticated with celebral palsy and she has a dog, a Goldendoodle called Wonder, that helps her to live in a world full of dangers and problems.

Ever since 2009, when Ehlena was 5, she has been helped by her dog to open doors, turn on and off the lights and many other activities that the girl alone can’t do, due to her condition.

She has been diagnosticated with celebral palsy, a disease that affected her arms, legs and body. The dog, that is her guide, has a certificate of being a service dog and another certificate of being a hypoallergenic dog, avoiding to create problems. Nevertheless, the school in which Ehlena was studying and learning decided to exclude the dog from the lessons. Obviously the girl could not attend the lessons anymore and so her parents decided to homeschool her.

Dog aid: the Supreme Court and the verdict

Ehlena’s parents decided to write a federal compliant to get her the treatment everyone actually deserves, and after years of battling, Ehlena’s dream came true; the Supreme Court decided that Wonder the dog must be admitted into the school, to help Ehlena get the integration she deserves. The family has also been allowed to sue the school and the discrict for violation of the Americans with Disabilities Act.

Stacy Fry, Elhena’mom, said that they’re hoping this will set a precedent to tear down the barriers: this is a victory for her family and all the families with children of differing abilities.