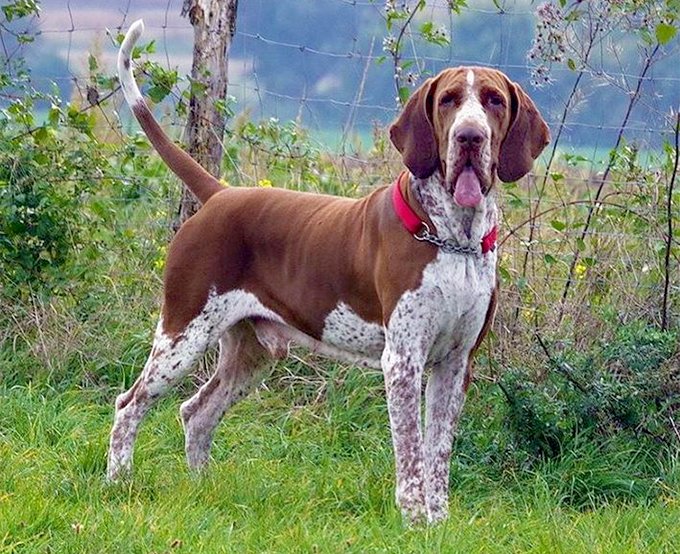 The Bracco Italiano dog is, not surprisingly, a hunting dog from Italy. His face and expression are opening him a spot in more and more homes. This one is a great companion and family dog. Also known as Italian pointer, the dog was developed to be an effective gun dog.

According to some writings, this original from Italy has an ancient history. We are talking about the 4th and 5th century BC. Some believe that he is a cross between the Asiatic Mastiff and the Segugio Italiano. Others say that his ancestry goes back to the St. Hubert Hound.

The Italian breeder Ferdinando Delor de Ferrabouc saved these dogs from extinction when they almost left us at the end of the 19th century and early 20th century.

The Bracco Italiano dog resembles a cross between a German Shorthaired Pointer and a Bloodhound. His body is powerful and athletic. He is an almost square dog, meaning that his height almost matches his length. He has a soulful expression accentuated by his droopy lips and eye expression.

The coat is dense, short, and glossy. The most common colors are white orange (bianco arancio) and roano brown (roanno marrone).  The general weight of these dogs is 55 to 88 pounds.

They are loving of family and especially children. The Bracco Italiano dog is a particularly good family dog. He thrives on them and needs companion all the time. If properly trained, they will do well with other pets. Keep in mind that this is a hunting dog, so his instinct will make him chase smaller animals. He is always alert and will warn you when a stranger comes and that is where his job ends. He is too nice to be a guard dog.

Caring for a Bracco Italiano dog

This is a gun dog, meaning that he is always alert. Make sure you provide plenty of exercise and fun activities.

The Bracco Italiano dog is a smart one, meaning that with consistent commands, you will train him easily.  However, if you lash out at him, he will just stop trying.