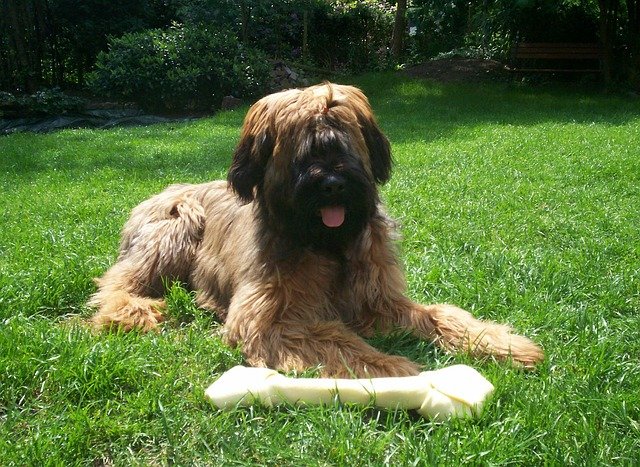 There are so many things to say about the Briard dog and all of them pretty great. This is a bold and pretty intelligent breed. He was originally bred to be a herding and guard dog assigned with the task of protecting flocks and also guarding off predators. Today, this dog on a shaggy, long coat is the delight of many homes.

The Briard dog is original from France. He is a pretty ancient dog whose origin can be tracked to the 8th century. Back in those times, his name was Chien Berger De Brie, which testified of his place of origin, Brie.

The first records we have of the Briard dog are found in Charlemagne’s depictions of the cat in his early tapestry. The first Briards are thought to have been introduced by Thomas Jefferson in 1928.

The Briard dog can be black, gray, or tawny. Their ears are usually cropped, but the practice is decreasing since it is illegal in most countries, including its country of origin, France. The dog has a double coat. The undercoat is fine and tight, whereas the outer coat is tough and dry. The males usually stand 23 to 27 inches tall and females are 22 to 26 inches tall. They typically weigh between 70 and 90 pounds.

These dogs are faithful, confident, and intelligent. This dog is a house dog, despite his size.  If he is taken outdoors, he is not the kind of being alone but rather curled up around you while you sit on the swing. True to his French nature, he is aloof of strangers, which make him a good guard dog.

Caring for a Briard dog

This dog usually needs 30 to 60 minutes of exercise. He can adapt to city or country life.  It is necessary to keep him active as he will display destructive behavior when bored. Placing him in dog races are a good way of letting out his energy and can help him with his herd nature.

The Briard dog needs a firm hand and a pack leader. Otherwise, he will try to assume the position. Due to his high intelligence, this dog is easy to train in obedience, home training, and crate training.

In Dogalize we know how important your dog is. This is why we have a lot of resources for you to choose from. Get in contact with us to find out more.