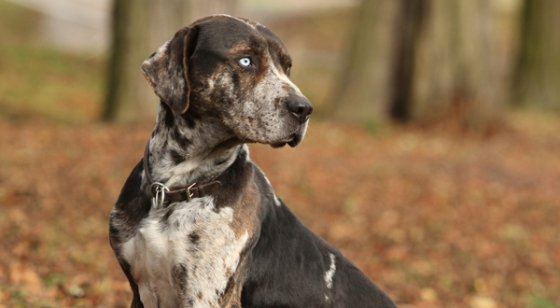 The Catahoula Leopard dog is a devoted worker with a beautiful appearance and striking pose. They also respond to other names such as “Catahoula Cur“, “Catahoula Hound“, or “Catahoula Leopard Hound“, even though he is not a true hound.  The name of this American breed comes from Catahoula Parish, Louisiana, United States.

The dog developed in North Central Louisiana in the area around the Catahoula Lake. Catahoula means “sacred lake” in the Chocktaw Indian dialect.

The Catahoula Leopard dog is thought to be the blend between local hounds and Mastiffs, Greyhounds, and Bloodhounds. Initially, they were used to hunt wild hogs.

The breed was named the official dog of Louisiana in 1979.

The physical characteristics of the Catahoula Leopard dog are pretty varied. This obeys to the fact that they were bred with a greater focus on their working abilities than their appearance. They come in a wide range of colors. Their coat can be wooly, slick, or coarse.

These dogs are wary of strangers but loving and protective of his family. They can be aggressive towards other male dogs. They feel the need of being aggressive due to their nature of hunting wild hogs.

The will make excellent guard dogs as they will bark at anything that moves.

Caring for a Catahoula Leopard dog

Their herding instincts make them hard-working dogs. If this is not available, they will find ways to steam off. You must provide at least one-hour walk daily. You do not want to keep this dog tied on a yard for too much time. He should be able to be on the inside as well as the outside.

This is an intelligent dog and will learn quickly. Train him in obedience starting as a puppy. Crate training can be beneficial to him if you will keep him indoors.

Leash training is very important. This dog is a strong puller and he will usually run to other dogs or small animals. Never leave him unleashed at the park or any other place where he will encounter other dogs or animals.

Check out all the information we have put together for you. You love dogs and so do we. Get in touch for more information.