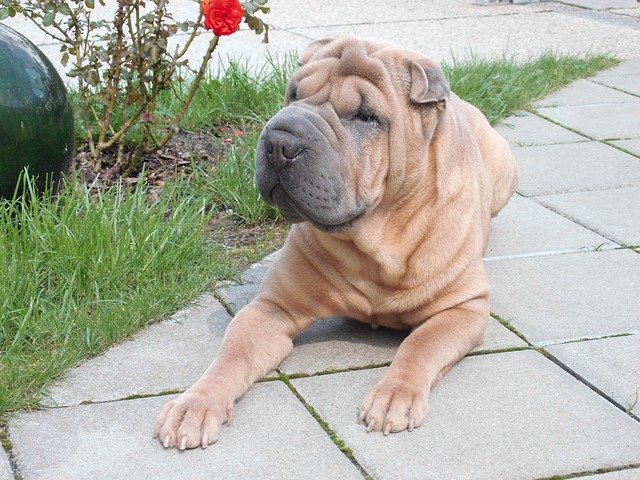 The Chinese Shar-Pei dog is a loving and affectionate dog built to hunt, guard, herd, and fight. This is an old breed that has been around for hundreds of years. He has a characteristic bristly, wrinkled coat.

Although it is regarded as an ancient dog, there is no solid evidence to prove this. The Chinese Shar-Pei dog originated in southern China where he was valued as a hunter, herd dog, guardian, and later on a fighter.

During the People’s Republic of China, most of the population was wiped out. Matgo Law, a dog kennel owner saved them from extinction by bringing a small number to the United States in 1973.  The American Kennel Club officially recognized the Chinese Shar-Pei dog as a breed in 1992.

The Chinese Shar-Pei dog has a unique look thanks to his high-set tail along with his small, triangular ears. The harsh and short coat color resembles that of a Chow-Chow. He is medium sized and with a square built. The head and body are covered with a loose skin. This loose skin and wrinkles are very noticeable in puppies but usually limit to the head and neck when adults.

He is deeply devoted to his family but aloof of strangers. Independent and always alert, he makes a great guard dog. This means that he will be very protective of his family and, true to his nature, will be aggressive towards other dogs.

Caring for a Chinese Shar-Pei dog

As long as he gets daily exercise, the Chinese Shar-Pei dog can do well in a small space like an apartment or condo. The truth is that this dog will be happy as long as he is next to you. They are classified as brachycephalic, just like the bulldog, meaning that they have short noses that make them sensitive to heat. To prevent heat stroke, keep him indoors with air conditioning or a fan.

Training should be consistent and constant throughout his life. Train him since day one. Socialization is important for this dog as he will usually attack other dogs.

The Chinese Shar-Pei dog is prone to several diseases, especially related to the skin. The rushing and inexperienced breeding they went through to save them when introduced to America in the 1970s resulted in several health issues.

Follow us here in Dogalize to get more information on everything related to dogs. We have useful resources on how to best take care of your pets.