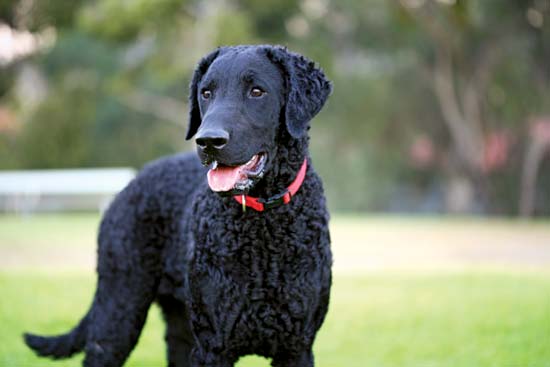 The Curly-Coated Retriever dog was conceived to retrieve game during hunting trips. This was a very popular English dog, especially among hunters, gamekeepers, and poachers.

Although the origin of the Curly-Coated Retrieve dog is uncertain, there seems to be no doubt that he is the oldest retriever. Some claim that he is descended from the extinct 16th century Water Spaniels, the retrieving setters, the St. John’s Newfoundland, and the Poodle.

His first appearance in a show in England was in 1860.  The breed was brought to the United States in 1907. The AKC officially recognized the Curly-Coated Retriever in 1924.

The most characteristic trait of the Curly-Coated Retriever is the tight curls covering his body. This is an active dog with a muscular body. The dog is slightly longer than he is tall. He is strong and possesses an interesting amount of endurance. He is a hard worker, well balanced, and agile.

The coat, who only accepts black and liver, is water resistant and protects the dog from damage that other dogs with similar coat thickness would not endure. The males can reach a height between 25 and 27 inches and the female stands between 23 and 25 inches.  Weight is proportional to its size according to standards.

This is one hard worker that will not stop until the work is done. He is a pretty reserved dog, especially with strangers. The Curly-Coated Retriever dog is determined and has a mind of his own. He is also alert and confident. If he gets bored, he will become a handful.

Caring for a Curly-Coated Retriever dog

This dog requires at least one hour of walking or exercising. He loves to work so you could keep him out of boredom by giving him some retrieving tasks. You might want to groom him

Early house training is essential for this dog. They are independent dogs that think pretty well about themselves. Be firm when training so that the dog understands who is in charge. He will take more time to respond positively to training than other breeds. This does not mean that he is not intelligent, it only means that he gets bored easily. Socialize him to prevent him from becoming timid.

We love dogs as much as you do. Here in Dogalize we want to help you get the best out of your pooch. Contact us for more information.