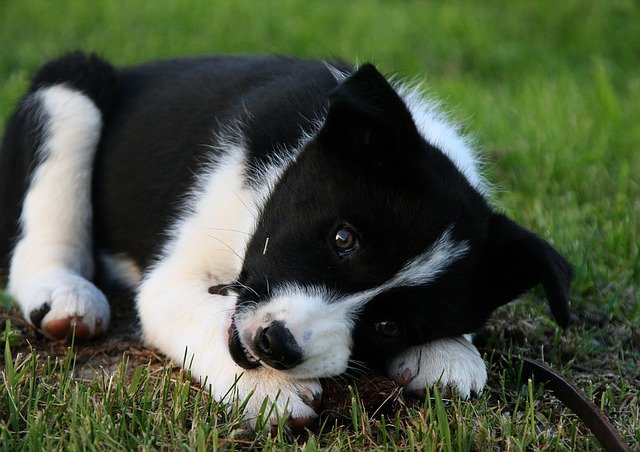 The Karelian Bear Dog is a national treasure in his country of origin, Finland. It is highly valued due to its hunting abilities. His strength makes him very popular for hunting aggressive game such as moose, wild boar, and bears.

Despite them being domesticated, they are still considered primitive dogs. This naturally-born hunter comes from a region in Finland claimed by the former Soviet Union. According to archaeological excavations, there are depictions of dogs very similar to the modern Laika and the Karelian Bear Dog dating back to the Neolithic time.

The dogs became almost extinct after World War II. It is unlikely for you to find this rare breed in your local pet store. In fact, there is an estimate 300 of them only in the United States. The first petition to add the Karelian Bear dog to the AKC’s Foundation Stock Service Program was issued in 2005.

The Karelian Bear dog has some unique characteristics. The only accepted coat color is black and white. He has a double coat that is not only beautiful but functional since it protects them from frostbite. The ears are upward-pointing and their small eyes are always alert.

The distinctive feature that makes this dog so appreciated is its powerful jaw grip. It is designed to exert a pressure of 230 pounds to hold its prey until his owner comes to free the prey. That is almost twice what a human can muster.

These are outdoor creatures that do not like to be confined. They thrive a lot better in farms and widely open spaces. Due to their social nature, they can suffer from separation anxiety if left alone for a too long time. They are silent dogs that will usually bark only in the presence of prey to corner them before a handler comes to dispatch him.

The Karelians are very territorial and aggressive towards other dogs. They need a lot of space so apartment living is out of the question. They are not recommended for families with children but do make great guard dogs.

Caring for a Karelian Bear Dog

As you can imagine, this dog requires a lot of exercise. To satisfy his natural hunting needs, involve him in games that involve seeking toys and holding them with their extremely powerful jaw.

Socialization is very important for this dog since an early age. Training is essential, otherwise, they will follow their own natural disposition which might make him too wild for a human companion. You should know that, if you are planning on training this dog, you’d better know what you’re doing. Experts recommend only experienced trainers to do so.

Check out all the resources we have for you here in Dogalize. Get in touch with us to learn more.