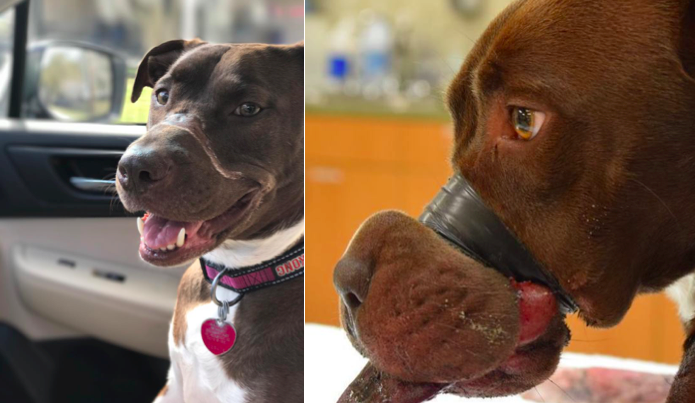 Man who bound Caitlyn’s muzzle with tape gets 5 years

In South Carolina, a man wrapped an electrical tape around his dog’s muzzle and he has been sentenced to 5 years in prison, the state’s maximum punishment for animal cruelty. He wanted to stop the dog, Caitlyn, from barking.

The story of Caitlyn

The poor dog protagonist of the story is Caitlyn, a 15 month old Staffordshire bull terrier mix. William Leonard Dodson had chained her, after wrapping her muzzle nine times with an electrical tape. The dog escaped and was found in critical condition, because the tape cut off blood flow to her tongue. Veterinarians free her after an estimated 36 painfully hours. They saw the fear in her eyes and the poor dog required repeated surgeries and lost part of her tongue.

The sentence is a message against animal cruelty

Caitlyn underwent reconstructive surgery after her muzzle was painfully bound with electrical tape and the man who did it, William Leonard Dodson, was sentenced to 5 years in prison last Friday for animal cruelty, after he was sentenced for a federal gun charge last Thursday too. He will serve both sentences simultaneously and he’s going to serve 15 years in prison. The Judge Markley Dennis said he wished the penalty could have been harder.

Aldwin Roman, the director for the Charleston Animal Society, said that Friday’s sentence was as good as they could expect.

Roman said that the sentence is a step in the right direction and it sends a message to the country and the entire globe, saying that animal cruelty won’t be tolerated.

“Today was all about sending a message to our community and really across the country and across the globe that we’re not going to tolerate animal cruelty anymore. We’re going to do everything that we can within the law to get justice for victims of animal abuse,” he said while holding Caitlyn in his arms.