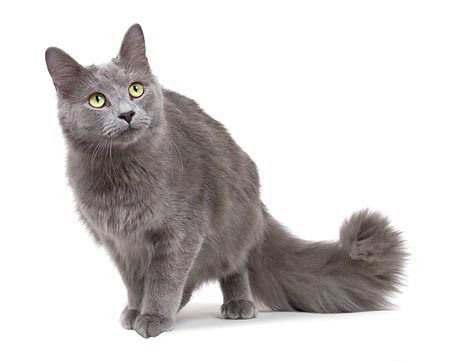 The Nebelung cat: character, behaviour and features. Discover it in Dogalize!

The Nebelung cat is a beautiful breed of domestic cat. The name means “creature of the mist” in German and it is a reference to the cat´s beautiful silvery-blue coat.

Cora Cobb of the Nebelheim Cattery developed this breed. Cobb started off with a long-haired blue cat named Siegfried, the only one in a litter fathered by a long-haired cat and delivered by domestic shorthair called Elsa. Then, a second litter produced a female long-haired blue kitten that Cobb named Brunhilde. These two became the foundation of the Nebelung cat when they produce their first litter in 1986.

Siegfried and Brunhilde looked like Russian Blue cat but with a semi-long coat. So Cobb decided to consult with a geneticist if a new breed was possible. This geneticist called the new breed as semi-long haired Russian Blue. Cobb wrote the same standards of the Russian blue only changing the length coat. Russian breeders did not agree and suggested different standards for the Nebelung cat.

The Nebelung cat is a pretty long cat. Pretty much everything in the cat is long, the neck, the legs, his body, and the tail. This makes him a graceful and slim cat. His round eyes can be green or yellow-green. He is a muscled and sturdy cat.

This is one gentle, quiet and even shy cat. He does like to play and interact with his owners. He is loyal to his owner and will give him all his love. The Nebelung cat expects to receive this love back. This is a sensitive cat that wants attention and will feel deeply sad if he does not receive it. He is an active and intelligent breed.

Caring for a Nebelung cat

You need to give this cat all the attention you can. Not doing so can cause him to become fearful or anxious. Make sure you can entertain your cat the time he requires.

We know how much you care for your pet. This is why Dogalize has tons of information, tips, and trick on how to better treat your pet.