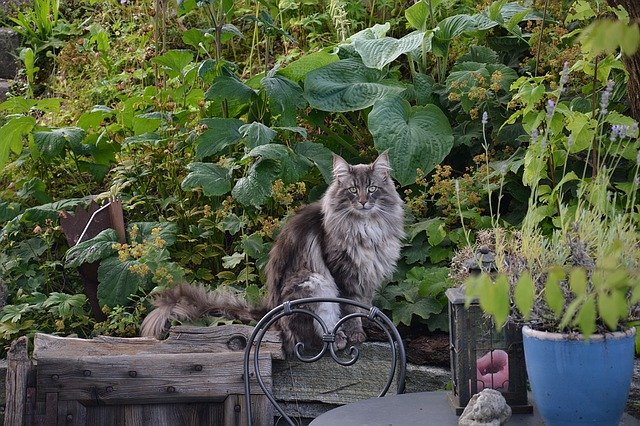 The Norwegian Forest cat is a domestic cat native to Northern Europe. This cat belongs to a natural breed adapted to the cold climate of Northern European. Those are cats very gentle and friendly. They love their owners but are not dependent.

The Norwegian Forest cat is originally from Norway and its origin can be traced back to thousands of years ago. Given the culture from which it comes, it is mentioned in many legends and fairy tales. The specific place and the way in which originated remain a mystery.

It is believed that their ancestors were black and white short-haired cats brought to Norway from Britain around the year 1000 AD, by the Vikings. These cats could have been crossed with local domestic cats to give rise to the current Norwegian Forest cat.

This beautiful feline has a strong build and is larger than the average housecat. The body is elongated, he has long legs and his tail is very hairy. All coat colors are accepted for the Norwegian Forest cat, except chocolate, lilac, pointed, cinnamon, and fawn.

Adult females usually weigh from 7 to 10 pounds, while males weigh between 13 to 22 pounds.

This is a smart and friendly cat who loves to be with his family. However, he is not an attention-seeking feline. He is a bit aloof with visits, but he does appreciate the company.

The Norwegian Forest cat is very athletic and active. It is not surprising to find him on the highest points of the house. Due to his water-resistant coat, he will not hesitate to get into the water to hunt something to eat.

Caring for a Norwegian Forest cat

You should brush this beautiful cat at least two times a week to prevent the accumulation of dead hair. Being a very active and athletic cat, he requires an owner who can provide him such time to play. Consider that his hair is waterproof, which makes bathing him a challenge.

In Dogalize we know the importance of your feline. This is why we have prepared material, resources, and information to help you take the best care of your cat.