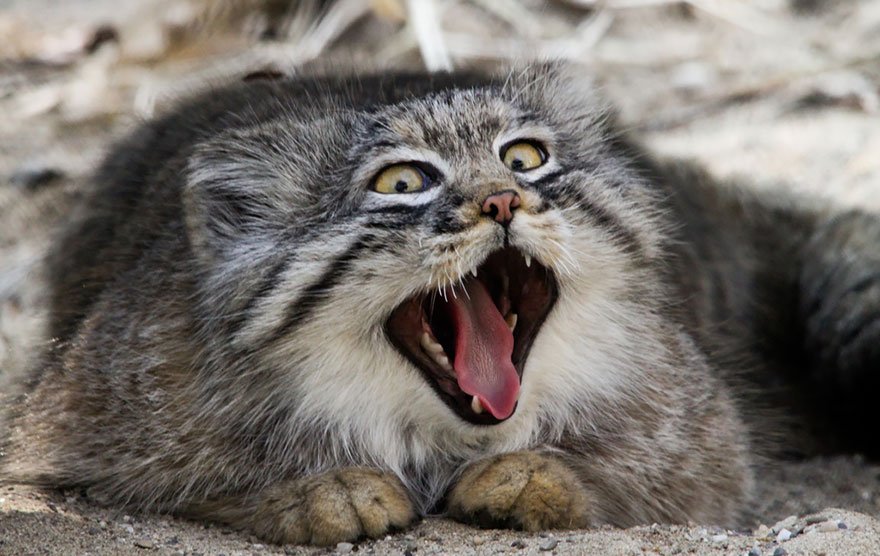 The Pallas Cat, born in the Himalayan foothill is known for being one of the most expressive cats in the world.  These super cute balls of fur have one interesting trait, their pupil is circular, like ours, which actually give them a human-like face.  This has earned him the title of “Most Expressive cat in the World“.

The scientific name of the Pallas cat is Octolobus, which is derived from Greek and means “ugly eared”.  The cat is named after German naturalist Peter Simon Pallas.  At first, Pallas erroneously described this cat as the ancestors of the Persian cats.  Pallas first describe this beautiful cat as Felis Manul in 1776.

The Pallas cat is about the same size of an average domestic cat.  However, his much thicker coat makes him look slightly bigger than such average cat.  Keeping these cats in captivity will run into a problem because their immune system does not work that well at lower altitudes, which in turn makes it difficult to keep them in captivity.

The coat of the Pallas cat is usually ocre with vertical dark bars on the foreleg and A large amount of lines on the face and chest make this a pretty exotic cat breed.  His flat face gives him a flat-face appearance.

Cats are solitary animals.  This makes them pretty territorial.  Most of their days then spend it in marmot burrows, caves and rock crevices.  They will usually go hunting in the afternoon.

Caring for a Pallas cat

If you were to have a Pallas cat in your arms, the first thing you need to know is that this is not a domestic cat. This means that you will probably have to keep them outdoors and kick off with some heavy training.

Want more information about other cat breeds?  Here in Dogalize not only we have  that but many other resources that you can use for the well-being of your loving companion.