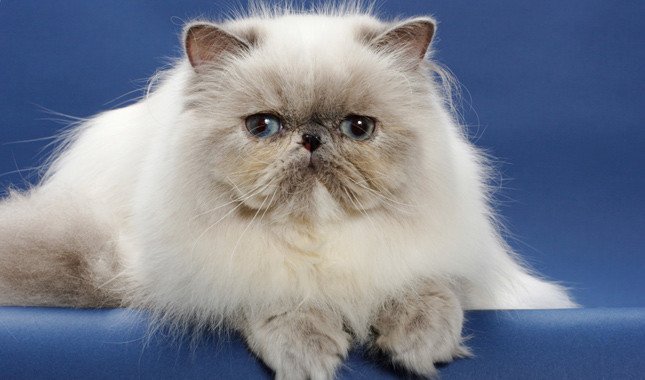 The cute Persian cat is best known for his silent and sweet nature.  To own one of these cats is to have a very docile and dignified cat.  He also has a very characteristic short snout and round face.  This cat´s ancestors were introduced from Persia (current Iran) in Italy during the 1620s.  His descendants had many names.

Since the branches of the long haired Wildcat are not known, it is difficult to determine the origins of Persian cats.  The first documents we have about the Persian Cat go back to reports of importation of their ancestors from Khorasan, Persia (Iran) to Italy in 1620 by Pietro del Valle.  Nearly during the same period, transportation of cats from Angora (now Ankara), Turkey to France by Nicholas-Claude Fabri de Peiresc were also reported.

This Angora cat would soon come to Great Britain from France.  Crossings between these and Persian cats were very common.  The first Persian cats were presented at the first cat show organized in 1871 at the Crystal Palace in London, England.  Nowadays, there are various forms of Persian cats.

A Persian Cat for display usually has a long and rich fur.  The legs are short, the head is flattened, short snout, ears widely apart, and large eyes. You can have any color or markings.  Eye color can also vary, these being blue, copper, green, bluish-green or hazel.

This is a medium-sized cat breed. Their weight is between 6 and 12 kg.

This is a very dignified cat. He is very kind with those who accept him in their lap and are willing to cherish him as he deserves.  He plays with children who know how to comb him and serve him tea as they sit at the table.  The Persian Cat is very affective but he is also discriminatory.  He will only give affection to their owners and visitors that have earned their trust.

Caring for a Persian Cat

To own a Persian Cat is to understand that this beautiful coat should be brushed daily. This will prevent the accumulation of hair and will also remove dead hair.  To keep the quality of the fur, a frequent bath is suggested, at least once a month.

At Dogalize, we want to share with you the love for your cat.  This is why we have many resources so that you can understand and take better care of him.  Get in touch with us for more information.