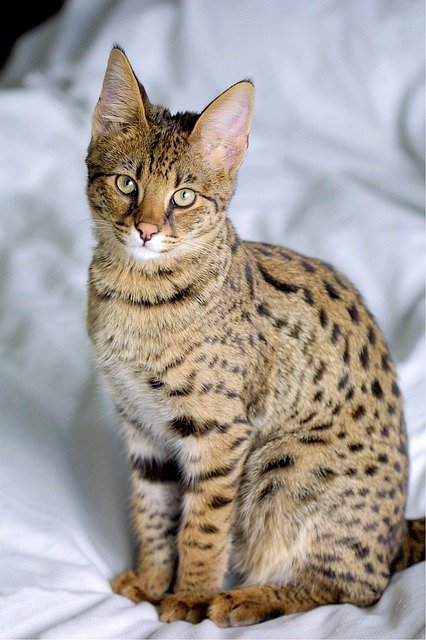 The Savannah cat is a hybrid cat that has the record of being the world’s largest hybrid cat breed.  This is a beautiful exotic domestic cat, result of the crossing between African serval and domestic tabby cats.

The cross between an African serval and a domestic cat resulted in a hybrid on April 7, 1986. The kitty was named Savannah. The owners of the kitten then decided to make an effort to create a new breed of cat.

Today, apart from being the world’s largest domestic cats, they are also the most expensive due to them being exotic. A Savannah cat can easily cost around 3,300 US dollars. The International Cat Association (TICA) began to register Savannah cats in 2001.  By 2012, it recognized the Savannah cat as a breed.

The body of a Savannah cat is slim and tall, which gives him the appearance of being larger than what he actually is. The coat of the Savannah has a point pattern. The standards only accept this design. Non-official forms of this cat include coats of blue, chocolate, lavender and other colors.

The exotic appearance of the Savannah cat is due to the presence of many serval features. Early generations of Savannah can weigh between 8 and 20 pounds.

This is a curious, intelligent, alert, and friendly cat. They are not aloof with visitors. If what you seek is a cute cat that will sit on your lap, the Savannah cat is not what you are looking for. This is an athletic and energetic cat who likes high-speed activities.

Because of their curiosity and skill, you might probably have to secure closet doors and drawers.

Caring for a Savannah cat

The Savannah cat may be a challenge in regard to their care. However, it is a rewarding job. To keep him happy, make sure you spend time to play games and mental skills activities.

You need to groom this cat at least twice a week to remove dead hair.

Follow us on Dogalize to learn new ways to keep your cat happy.  We have several resources that can help you and your cat to get along better.