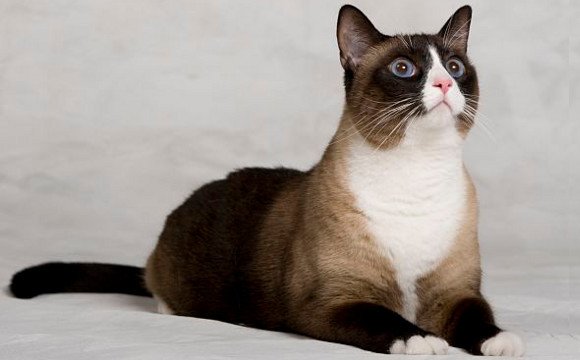 The Snowshoe cat is a rare cat breed resulting from the cross between the Siamese and the American Shorthair.  This singular cat has characteristic markings and a strong body.

This rare and unique breed first appeared in the 1960s. Siamese breeder Dorothy Hinds-Daugherty from Philadelphia noticed three kittens in her litter with distinctive white paws, which was an unacceptable feature in the Siamese breed. She then started a breeding program to create Siamese-like cats with white feet.  She called them “snowshoes“.  She crossed the white-booted Siamese with the bi-colored American Shorthair to eventually obtain them.

In the last ten years, only 388 Snowshoe cats have been registered to The International Cat Association.  They recognized the breed in 1994.

The name “Snowshoe” comes from the standard that dictates that his paws must be white.  When born, the kittens are all white.  It is not until several weeks later that they develop their characteristic black point on their face, ears, legs, and tail.   The white coloration in their paws is due to a recessive gene, which makes this cat very difficult to breed, hence its rarity.

Another striking physical trait is the inverted V on his muzzle as well as his mesmerizing blue eyes.

This cat is affectionate and very loving of their humans.  They do require a lot of attention.  This is the kind of cat that you would not leave at home and go out for work during eight hours, as they do not enjoy being alone.

He is a very smart cat and active cat that can acquire many roles at his home.  Their intelligence and agility enable them to easily learn to open doors, cabinet, and to learn tricks.  You will often see it perching at top cabinets and refrigerators checking on everything in the house.

Caring for a Snowshoe cat

If you get hands on a Snowshoe cat, you will have a long-living cat as long as you take good care of their teeth.  Just like the Siamese, they tend to have dental issues such as gingivitis and other issues related to their dental care.  As with their grooming, you should not have any issues as these intelligent cats groom themselves and rarely shed.

Here in Dogalize we have everything you need to take care of your Snowshoe cat.  We also have information and adoption help in case you want to get one.  Contact us for more information.