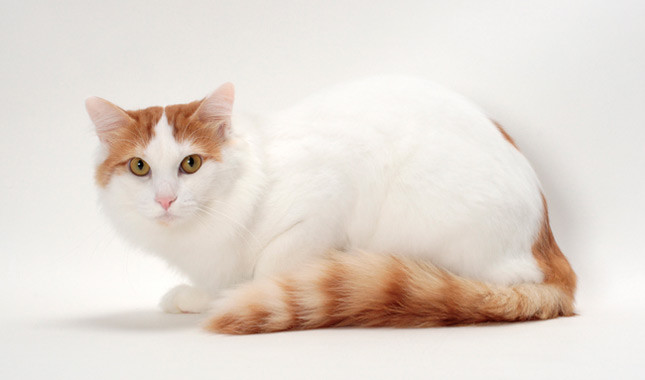 This is one affectionate cat that, even though he might not sit on your lap, he will sit next to you to cuddle.  The Turkish Van cat is a white and fluffy cat breed with colored tail and ears.  He has a rather unfortunate feature: he will not always land on his feet.

This is one of the oldest domesticated cats on the planet.  He probably originated in the Lake Van area in Turkey.  Legend has it that the Turkish Van was an effective ratter in Noah´s Ark.  If you see a mark on the back of his neck, it is considered to be the “thumbprint of God” which is a good sign.

They first arrived in the United States in 1982.  The International Cat Association officially recognized the breed in 1985.

The Turkish Van cat has a beautiful, stunning athletic look.  His fur is very soft and silky, making him a wonderful cat to pet.  This coat is smoother and thinner than the average cat.  The color of their coat is the result of what is known as the “van gene“.  They have a characteristic brown mark on the top of their head and the tail.

Their eyes are sometimes blue, sometimes amber, or one of each.  His muscular body has often being compared to that of a swimmer’s.  In general, they are strong and sturdy cats whose skeletal build gives them a bulldog-like stance.

This cat is an athletic, intelligent, and independent cat.  He is a very vocal cat and strongly attached to one or two of his humans.  They do look huggable but these cats are not ones that look constantly for it but they rather like to have their space.

The Turkish Van cat is very intelligent and can learn tricks and games easily.  They love to perch overhead so make sure you don´t have objects in display that might break.  He can be mischievous and just see what would happen if items fell.  He can sometimes just be clumsy.

But one trademark of this naturally occurring cat is his fascination for water.  They enjoy swimming as they were born to swim.

Caring for a Turkish Van cat

These cats can suffer from obesity so you have to be careful not to overfeed them.  Their coat does require special attention and requires brushing on a more regular basis.  This is done to prevent matting, tangling, and remove dead hair.

The Turkish Van cat is a great cat for families with older children.  They are not really appropriate for small children.  If you want to learn how to best take care of your cat, follow us here in Dogalize.  We have everything you need to know about cat care plus many resources and lots of information.