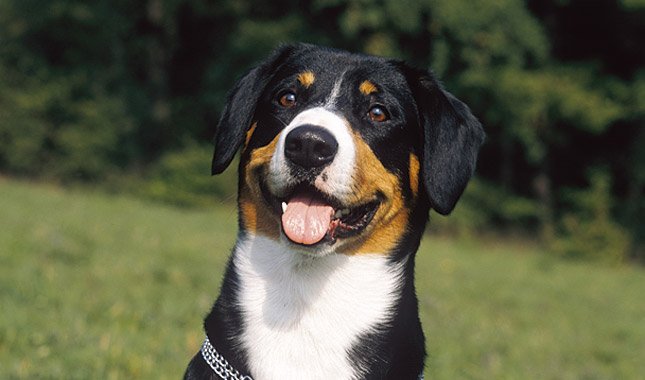 The Entlebucher Mountain Dog is a herding dog that loves to spend time with their families.  He is also known as Entlebucher Sennenhound, referring to a people called Senn, herders in the Swiss Alps.

The Entlebucher Mountain Dog probably descended from large molossers brought by the Romans to Switzerland in the first century.  They were very similar to the Appenzeller Sennenhund and it was not until 1889 that the Entlebucher was described as a separate dog breed.

World War I took its toll on the breed since no sample of it could be found after it. The AKC officially recognized the breed in 2011.

The Entlebucher Mountain Dog is the smallest of the four breeds of Sennenhunds that also include the Grosser Schweizer Sennenhund, the Berner Sennenhund, and the Appenzeller Sennenhund.   These dogs have a muscular and long body.  The coat is short and shiny.

He is a medium-sized dog with a square body.  His head is well proportionate to the body and his jaw is also well formed and powerful.

The major characteristics of this dog include intelligence, agility, attitude, and loyalty.  He loves to spend time with his family and creates a strong bond with them.   However, he is self-confident and independent.

He makes a good guard dog as he will bark to announce the presence of strangers. He does well with kids but should not be left alone with them.  They Entlebucher will “herd” the children by nipping on their heels.

Caring for an Entlebucher Mountain Dog

The Entlebucher Mountain Dog requires at least an hour of physical activity.  It is also recommended for you to enroll him in activities that involve sports like Frisbee, tracking, or agility.

This is a smart working dog, so keep him busy and happy by providing tasks.  Start training him early by socializing with other dogs and people.

Don´t forget to visit us here in Dogalize to stay up to date with the latest information about dogs and care.  We also have lots of resources to help you better care of your dog.