Dog breeds: the Finnish Spitz characteristics and behavior – only in Dogalize!

The Finnish Spitz dog is a talkative dog that will take you through all the eventualities of his day.  Initially created to find small and big game, today he makes a great companion dog. Oh, and it holds the honor of being Finland´s National Dog.

It is thought that spitz dogs were brought to Finland from central Russia by Finno-Ugrian tribes that migrated.  They used the dogs mainly for hunting.  In the case of the Finnish Spitz dog, there is no documentation about their origin.

Among the spitz-type dogs brought in by the tribes, the Finnish Spitz was their favorite.  By 1880, the few Finnish Spitz dogs were mated with other dog breeds, making this pure breed practically almost disappear. But Hugo Ross, a sportsman from Helsinki observed the pure native Finnish Spitz while hunting.  He revived the breed by selecting specific characteristics.

This dog, known as Suomenpystykorva in Finland has a square build and the looks of a fox.  One important characteristic is that they are pointers, but instead of pointing game, they bark at it.  So, they are something like “bark pointers“.

Their neck is unusually short.  The breed in itself is not a big one.  They can be 17 to 20 inches tall.  They have a double coat made of a thick undercoat and harsh guard hairs. Puppies are born fawn, black, gray, or brown.

This is a dog that is always alert which makes him a great watchdog.  They are active, friendly, and very protective of their family.  He is a social dog, accepting of other animals and great with children.  One rather interesting feature of the Finnish Spitz dog is that they are slow in maturing; it usually takes from three to four years. During this time, he will decide to accept you as the alfa or not.

Caring for a Finnish Spitz dog

The Finnish Spitz dog is a highly energetic dog and requires a lot of exercise.  We do not recommend them for apartment living or for you to take one home if you cannot provide them with the needed exercise.  Just like with any other dog, do not throw him unattended in the backyard. If he gets bored, he will bark loud.

Make sure you can provide at least 30 minutes of walk in the neighborhood.

Proper care of the coat is really important. The Finnish Spitz blows coat or loses its undercoat at least 2 times a year.

It is imperative that owners brush out the old undercoat so the new coat can grow without problems. Although a dog may look fluffy, excessive undercoat may be causing skin problems. 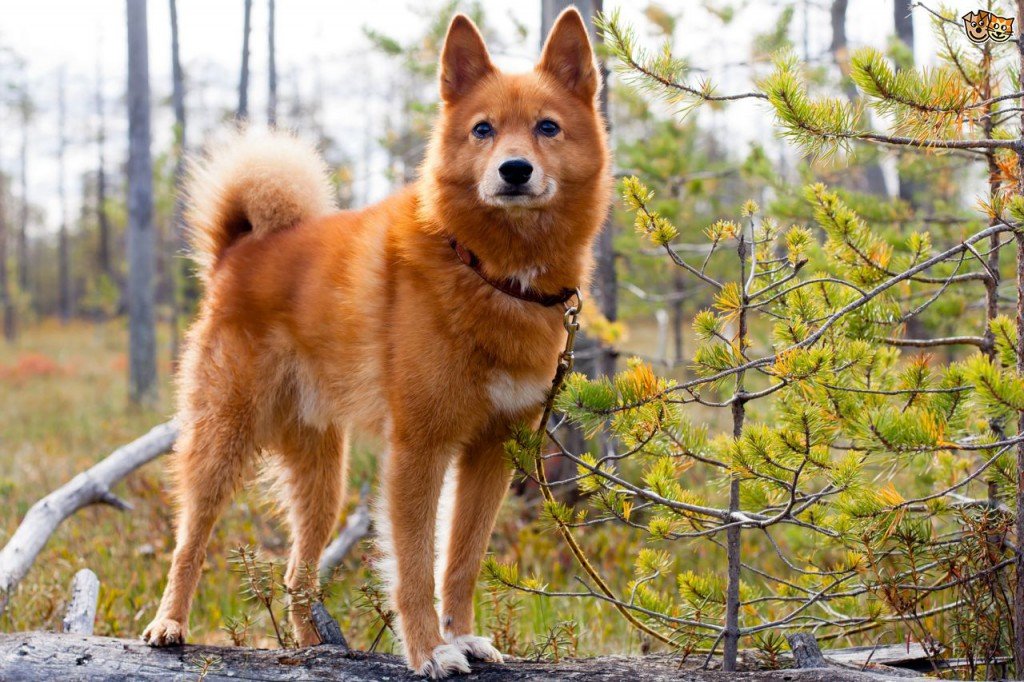 In the show ring, the coat should be shown as completely natural; a brush through the coat is acceptable, but no trimming is allowed, not even of whiskers. However, any excessive undercoat should be removed. Some exhibitors choose to show dogs with excessive undercoat to make the dog’s coat appear more lush. Failing to shed undercoat is considered neglect by some judges who prefer a clean and combed coat. Another exception is the hair under the bottom of the feet. The hair under the feet as well as the toe nails should be nicely trimmed for show.

Training these dogs can be a challenge which is one of the reasons why this dog is not suited for new owners.  Use a soft and gentle voice.  They are smart dogs, which means that they will get bored easily.

Follow use here in Dogalize to learn more about other breeds.  Planning on adopting but do not know what to pick? We can help with that and more.  Contact us for more information.